Situated in an area of outstanding natural beauty on the shores of the continually-warm Laccadive Sea in Kerala, south west India, Alleppey is renowned for its network of canals, which prompted the former Viceroy of India, Lord Curzon, to pronounce this historic and charming town "the Venice of the East".

The flat and verdant lands around Alleppey, also known as Alappuzha, are believed to have been inhabited since before the first century AD and by the Middle Ages had established trading links with Greece and Rome. The arrival of Portuguese colonists in the late sixteenth century and Dutch colonists a century later influenced cultural, religious, economic and political aspects of the town, whilst in the nineteenth and twentieth centuries Alleppey's already diverse cultural and historic heritage was further enriched under the rule of the British Empire.

The legacy of successive colonists is evident in Alleppey's abundance of religious buildings which include ancient many ancient Hindu temples and Christian and Catholic churches which include the stunningly-decorated St Mary's Forane Church, consecrated in 427A.

A popular way to appreciate the scenic Alleppey and its surrounding countryside is to travel the town's temple-lined canals and serenely beautiful backwaters by boat. For ultimate relaxation, however, little can beat reclining on one of Alleppey's pristine, coconut-palm fringed beaches. 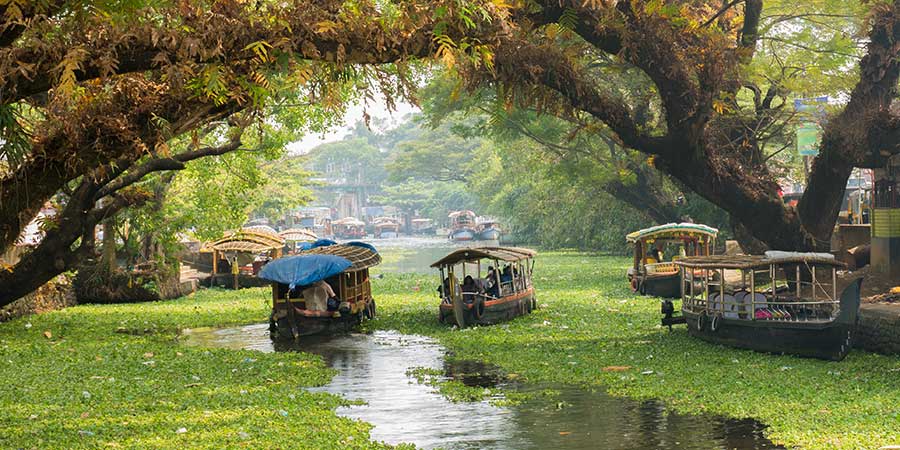 Our guide to Alleppey
Local sites to see

Although Allepey's status as a sea-trading port was established at the end of the eighteenth century, construction of the town's lighthouse didn't begin until 1860. Completed two years later, the lighthouse was constructed from local stone, has a teak spiral staircase and originally featured a double-wicked lamp powered by coconut oil which remained in use until 1952. The lighthouse is still manned and can be visited between 3pm and 5pm each day.

Alleppey has its own long stretch of sands, but boisterous waves and strong tidal currents mean that it is unsuitable for swimming. Marari Beach, just fifteen kilometres north of the town is uncrowded, shaded by palm trees and offers acres of clean, white sand and tropically warm waters.

Set within beautiful landscaped gardens, this remarkable museum dedicated to local entrepreneur and philanthropist Revi Karuna Karan houses one of the largest collections of Swarovski crystals in the world as well as hundreds of items of fine porcelain from the great manufactures including Delft, Armani and Capo di Monte.