Less than eight miles from the Hindu holy city of Varanasi is Sarnath, the site of the deer park where Gautama Buddha first taught the Dharma after his enlightenment. The deer park is one of four holy Buddhist sites sanctioned by the Buddha himself for pilgrimage. The other three sites are Lumbini (birth); Bodh Gaya (enlightenment); and Kushinagar (death).

Sarnath has previously been known as Mrigadava ("deer park") and Isipatana (the place where holy men fell to earth). The current name Sarnath, from Saranganath, means "Lord of the Deer" and relates to an old Buddhist story in which the Bodhisattva is a deer and offers his life to a king instead of the doe he is planning to kill. The king is so moved that he creates the park as a sanctuary for deer. The ancient buildings and structures at Sarnath were damaged or destroyed by the Turks, but amongst the ruins is the Dharmekh Stupa, an impressive structure 128 feet (39 metres) high, and 93 feet (28 metres) in diameter. This dates from around 200 BC and is the spot where the Buddha is said to have preached his first sermon. 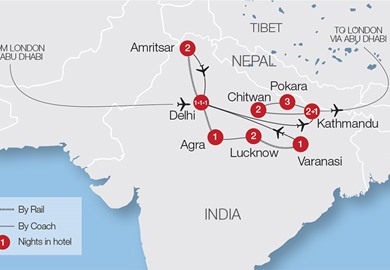 Map and accommodation
Our customers love our Sarnath tours
Powered by

Grand Tour of India & Nepal
Anonymous
“Great experience but very tiring. We could have flown direct to |Amritsar and then taken a train back to New Delhi. We could in each city have stayed somewhere close to the sights so that we would not have needed to spend hours extra stuck in traffic jams as we tried to cross the cities.
Lastest articles from our journey blog