Québec City is the only fortified city north of Mexico City. The area celebrated its 400th anniversary in 2008, having been founded by French explorer Samuel de Champlain in 1608. Few cities in North America have reached this milestone.

When Champlain chose the location of his settlement he named it 'Kébec', which was an indigenous word meaning 'place where the river becomes narrow'. During the 17th and 18th centuries, Québec City was the centre of New France and its enormous territory, which at the time covered all of Eastern Canada, the Eastern United States, the Great Lakes and Louisiana, extending from Hudson's Bay in the North to Florida in the South. 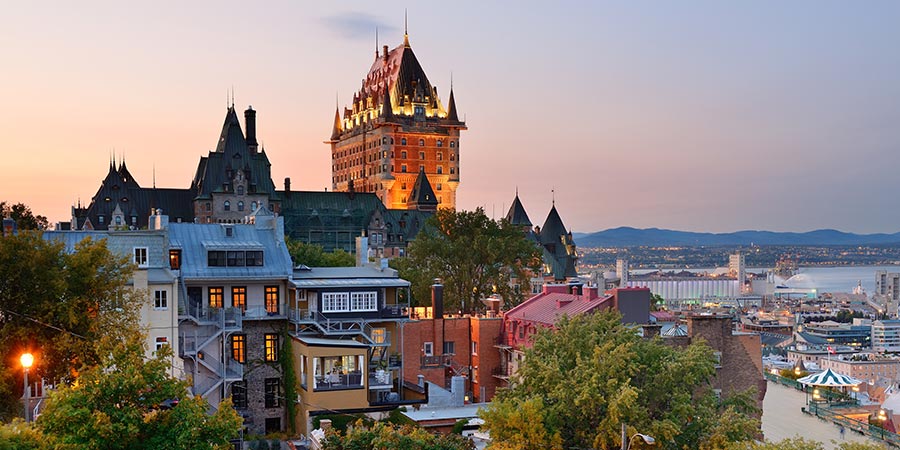 Our guide to Québec City

Champlain chose to build his first home at the foot of Cape Diamant, in a neighbourhood known today as Place-Royale. You can discover the history of this place, considered to be the cradle of French civilization in the Americas, at the Place-Royale Interpretation. From its origin as a fur trading post to its present status as Québec's provincial capital, Québec City has changed dramatically, but has been careful to preserve and restore elements from its past. Québec City was under French rule between 1608 and 1759, except for the period between 1627 and 1632, when the Kirke brothers controlled the city.

The Recollets, who were the colony's first missionaries, arrived in 1615. They were soon followed by the Jesuits in 1635, then the Ursulines and Augustines in 1639. Built between 1748 and 1750, the New Barracks was the largest building constructed in New France at the time. In 1759, the famous battle of the Plains of Abraham would alter the course of the colony's history that had been, until then, fairly uneventful. The English won the battle and took control of the city, then later the colony. The following year, France signed the Treaty of Paris, thus transferring ownership of New France to England and putting an end to the Seven Year War. In 1775-1776, American troops tried, and failed, to capture Québec City. The Constitutional Act of 1791 divided the "Province of Québec" into Upper and Lower Canada and designated Québec City as the capital of Lower Canada.

In 1841, the Union Act united the two Canadas. Over a period of a few years, different Canadian cities played the role of national capital, including Québec City. Even today, Québec City is still referred to in French as the 'Vieille capitale'; the 'Old Capital'. Following the adoption of the British North America Act in 1867, Québec City became the capital of the province of Québec. Old Québec was named a UNESCO World Heritage Site in 1985.

"Wander the Old Town and savour the subtle differences between French Canada and neighbouring Ontario. Do not miss the trip to the sugar shack, All you need to know about Maple syrup."- John Coppen - Canada Tour Manager