One of Canada's oldest cities, the city of Victoria was named, naturally, after Queen Victoria when it was settled by the British in 1841. Throughout the city's period of British rule, Victoria was an important centre for trade and commerce, and as such it became the capital and largest city of British Columbia.

In more recent years, Victoria has been recognised more widely as a beautiful city, now known for its temperate climate and relaxed atmosphere, and nicknamed 'the city of gardens'. With its quaint streets, fine Victorian architecture and genteel shops, the city is packed with attractions, making it a joy to discover. 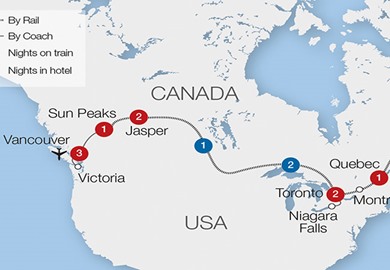 “Fantastic experience Kay our tour manager was very professional and helpful. Thoroughly enjoyed the company of our fellow travelers. The accommodation was superior and the overnight stays and tours excellent
Collected by Great Rail Journeys

The Museum has permanent galleries relating to natural history, modern history and the First Peoples.

Set in the city's inner harbour, here you can observe British Columbia's marine life - up to 15 feet (4.6 metres) below the water's surface. More than 5,000 species live here, including starfish, salmon and a Giant Pacific Octopus.

From Victoria, there is the exciting opportunity to go whale watching. In many cases there are fully narrated tours in specially-designed boats which leave from Victoria for the waters just off the island's southern tip.