Toronto is the largest and most heavily populated city in Canada, with over 2.5 million inhabitants. It is heralded as one of the most multi-cultural cities in the world, with more than 100 languages spoken here. Being home to the headquarters of Canada's five largest banks, it is arguably the country's economic powerhouse as well.

The city has quite a short history, as very little is known about the area before it was purchased by the British monarchy in 1787. Soon after this it was settled as the town of York. As it was in a strategic trading position, the town grew quickly. In 1834, it was renamed Toronto and was declared a city. It has continued to thrive and expand ever since, and today it offers a number of fascinating attractions for visitors.

As well as a wealth of museums, Toronto boasts a number of art galleries, excellent restaurants and thriving shopping centres. Toronto also has hundreds of parks and the world's longest street - Yonge Street - which is 1,896 kilometres long. 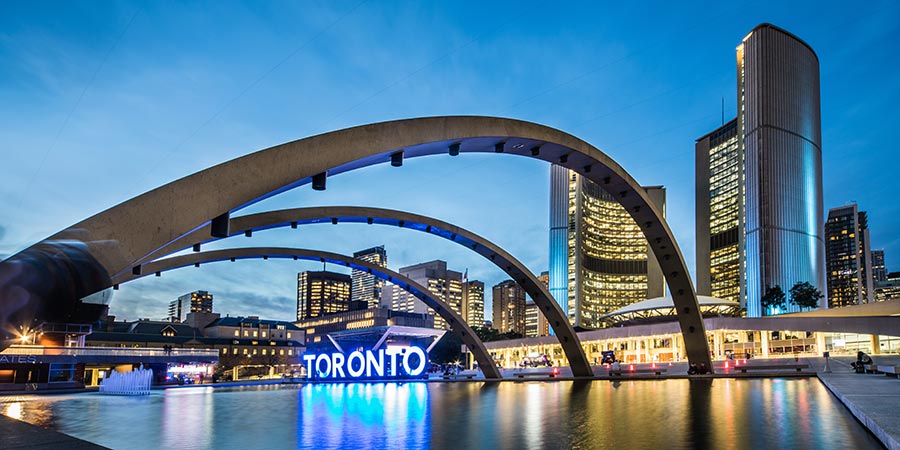 Our guide to Toronto

At 1,815 feet (553 metres) tall, the CN Tower is one of Canada's most recognisable and celebrated monuments. The tower stands in the heart of Toronto and offers terrific panoramic views across the city and waterfront. The tower attracts about two million visitors each year and has four separate look-out levels. Level One has a spectacular glass floor (not suitable for those who suffer from vertigo). Level Two is the indoor observation deck and Horizon's Café. At Level Three you can dine in the Revolving Restaurant, which rotates once every 72 minutes, giving you chance to dine while enjoying breathtaking views across the area. Finally, on Level Four (at 1,465 feet or 447 metres) you'll find the "Sky Pod", which has the world's highest public observation deck.

Containing the finest collection of Victorian-era industrial architecture in North America, the Distillery District in downtown Toronto is home to a plethora of art galleries, restaurants, bars and live music venues. The brick-paved streets of the neighbourhood have been designated as a National Heritage Site.

A 10-minute ferry journey from the harbour takes you to Toronto's quiet, interconnected collection of tiny islands. The ferry ride to the islands makes for an interesting mini cruise, with great views of the city skyline, while Ward's Island is an ideal spot for taking a stroll among the leafy streets and quaint cottage-like houses.

Toronto City Hall is one of the city's most recognisable and celebrated buildings. Its design was selected as the winner of an international architectural competition after the local municipal government (and the people of Toronto) had rejected a proposed design submitted by a collaboration of local architects. The building was opened in 1965 and the design, by Finnish architect Viljo Revell, was unlike anything seen in Toronto before.

Famous for being the world's longest street (a much-disputed claim), Yonge Street runs from Lake Ontario in Toronto to Lake Simcoe, located at the gateway to the Great Lakes. The street runs through the very heart of Toronto and is one of the city's main thoroughfares.

Canada's answer to a medieval castle, Casa Loma was built in 1911-1914 and includes magnificent decorated suites, secret passages and an 800 feet tunnel - all situated within five acres of beautifully managed gardens.

To see Toronto from a different perspective, why not take a helicopter tour of the city? There are a number of different operators available, all offering flights over the city, its landmarks and the picturesque harbour front area. Alternatively, you could enjoy a cruise from Toronto Harbour to explore the beautiful islands that lie off Toronto's coastline.

Toronto is famous as a multi-cultural city, which is reflected in the fantastic food and plentiful varied dining options throughout the different districts of the city. You will find Chinese, Vietnamese, Malaysian, Thai, Indonesian and Japanese restaurants in the city's original Chinatown, while Greektown, Little India and Little Italy are all worth visiting for their own regional restaurants.

Located in one of the oldest neighbourhoods in Toronto, Kensington Market is part of the fabric of Toronto and has been designated as a National Historic Site of Canada.

"The New York of Canada. Everything is here. Food and entertainment galore. Experience it all from the top of the CN Tower."- John Coppen - Canada Tour Manager