Straddling the US-Canadian border, between the state of New York and the province of Ontario, Niagara Falls attracts as many as 12 million tourists every year. The Falls are split into three separate sections: the American Falls, the small Bridal Veil Falls, and the Canadian/Horseshoe Falls. The complex of the falls date back about 12,000 years, when melting glaciers allowed a passage of water from Lake Erie to Lake Ontario. It is believed that the waterfalls themselves were about seven miles away from their present site at that time, but that erosion has cut them back.

The Horseshoe Falls are the second largest falls in the world, after the Victoria Falls in southern Africa. They are also the easiest to access and view. Here the Niagara River cascades over the crest at the rate of 600,000 US gallons every second, travelling at 20 miles per hour. They are an impressive 2,600 feet (792 metres) wide, and stand at a height of 167 feet (51 metres). 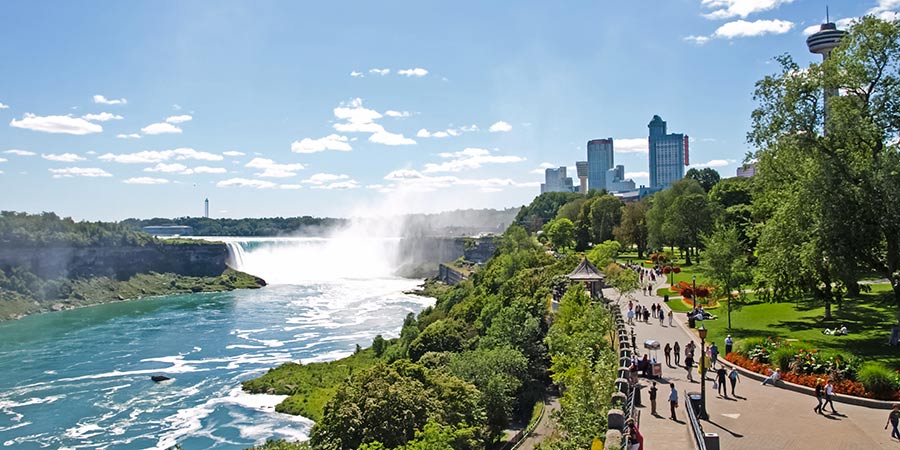 Our guide to Niagara Falls

Maid of the Mist

One of the most popular activities at Niagara Falls is the Maid of the Mist boat tour. The boat excursion runs across the calmer waters of the Niagara River, past the American and Bridal Veil Falls, before entering into the heavy mist of spray caused by the Horseshoe Falls. It is one of the best ways to experience the awesome power of the Falls. The Maid of the Mist was originally launched in 1846 as a ferry service between Canada and USA, but soon lost most of its business when the Niagara Falls Suspension Bridge was opened. Within eight years of opening, the Maid of the Mist was transformed into a tourist service and has continued to operate in this way ever since.

Situated along the scenic Niagara Parkway, Niagara-on-the-Lake is a picturesque, Georgian and Victorian styled town that was once the capital of Ontario. Today it has a beautiful Old Town and is well-worth a short visit.

At Table Rock you can admire the Falls from the viewing area, watching the immense flow from the mighty Niagara River - carrying water from the Great Lakes over the second largest falls in the world. From Table Rock you can take a trip behind the Falls. The "Journey Behind The Falls" begins with a descent, by elevator, 150 feet (46 metres) through bedrock to tunnels that lead to the Cataract Portal and the Great Falls Portal, which is one-third of the way behind the massive sheet of water. Then you walk on to the Upper and Lower Observation Decks at the very foot of the Falls.

Located along the Niagara River downstream from the Falls, the Niagara Whirlpool is a natural whirlpool with a depth of up to 125 feet (38 metres). The whirlpool spins anticlockwise during normal flow, although when water from the river is diverted into the surrounding hydroelectric power station, the flow is often known to reverse.

"Everyone thinks they know Niagara but until you have been under it and through it you can't comprehend it's power."- John Coppen - Canada Tour Manager