Memphis is the second largest city in Tennessee, and was named after the ancient Egyptian capital. Founded in 1819, the city became wealthy as one of America's largest cotton markets. Like much of the South, Memphis was briefly plunged into an economic depression after their defeat in the Civil War and the abolition of slavery. But it quickly rose from these ashes, thanks to its position on the Mississippi River and its location as a rail hub. 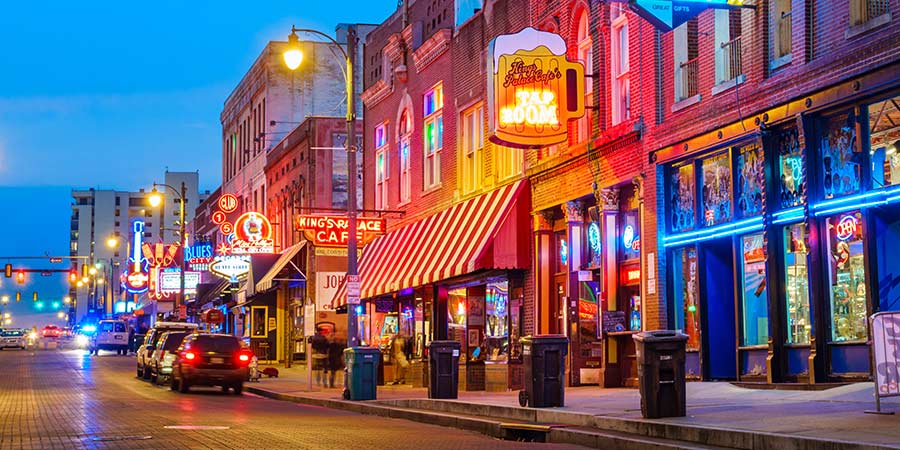 Our guide to Memphis
Local sites to see

The city is now perhaps best known for its 20th century musical heritage, and iconic performers made their records here. Many of the city's highlights are music-related. One such highlight is the Sun Studio.

In 1954, a 19-year-old trucker made this quiet recording studio infamous when he recorded 'That's All Right'. Although the song failed to chart, it was still Elvis Presley's first single and so many of his contemporaries flocked to the studio to record their songs. Jerry Lee Lewis, Roy Orbison, Carl Perkins and Johnny Cash all had hits originating from Sun Studios. The studio closed in 1959 and became a scuba-diving shop. But its soundproofing had never been removed and so in 1987, it was decided the studio should be restored to working condition - with a museum to commemorate its historical significance.

Another of Memphis' highlights is the Stax Museum, which stands of the site of the former Stax Studios. Otis Redding and Isaac Hayes were just two of the acts that put more than 230 records into America's Billboard Hot 100 for the famous label. Today the museum tells the story of the major operation that came to be known as 'Soulsville USA' through a range of audio and visual exhibits. The museum also provides space for up-and-coming talent to rehearse.