Although Atlanta is the capital of Georgia it was a small place of very little importance until relatively recently. In 1837, it was decided that the Western & Atlantic Railroad would build its terminus in the area. On the opening of the railway the city quickly grew to become a major transportation centre, and continued to expand as a result. During the Civil War Atlanta proved to be the crucial logistics hub, and also became home to the Southern forces' munitions industry. Because of this, the city was burned down by the Union Army in 1864 - an act that was immortalised in the novel 'Gone with the Wind'.

Atlanta bounced back from the Civil War, and is now regarded as one of the USA's top business cities. Many firms, including Coca Cola, have their world headquarters here. Given the city's history, a number of its main attractions are related to the Civil War. These include the Atlanta Cyclorama, a huge panoramic painting of the Battle of Atlanta. The painting is cylindrical, and has to be viewed from the inside. If the painting was to be laid from end to end, it would be 358 feet (109 metres) long. 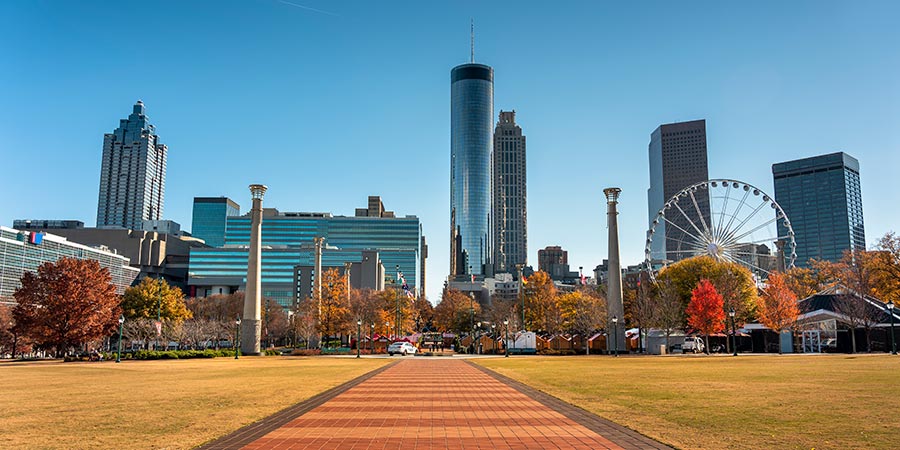 Atlanta's museum also serves to give a detailed history of the South and its role in the American Civil War. Another of the city's highlights is Margaret Mitchell House, where the author lived from 1925 to 1932. The house provides an insight into how she lived, as it has been kept much as it was. The house is where Mitchell wrote most of her masterpiece, 'Gone with the Wind'. The epic story of Scarlett O'Hara and Rhett Butler became an instant classic on its publication in 1936, and has sold well over 30 million copies worldwide, making it one of the world's best-selling books. In 1939, the perennially popular film adaptation was released. It became the highest-grossing film ever - in number of tickets sold - and won a then record-breaking 10 Oscars.