Svolvaer, a modern town that has grown from an ancient fishing village, is situated on the east coast of the island of Austvågøy, one of the larger islands of Norway's Lofoten archipelago. Lofoten's location in the beautiful Nordland region ensures that Svolvaer enjoys superb views of the archipelago's snow-capped peaks and shimmering blue fjords.

Just inside the Arctic Circle, Svolvaer's temperature hovers around freezing point throughout the year but when the sun shines this pretty and traditional town and the landscapes that surround it in every direction are never anything less than achingly beautiful.

The establishment of the first villages in this area of Norway can be traced back around nine hundred years, and Svolvaer's long-established historical importance as a fishing village secured it official town status in 1918. Cod, herring and salmon farming are still the major contributors to Svolvaer's economy, but in recent years the town has become a popular destination for visitors who wish to explore the Lofoten archipelago with regular boat and air services bringing in more than two hundred thousand visitors each year.

During October and November Svolvaer offers excellent opportunities to spot Orca whales feeding on the archipelago's vast herring population, whilst other popular activities include mountain hiking; boat trips into the famous Trollfjord, habitat of the magnificent Sea-eagle and observing the enigmatic aurora borealis. 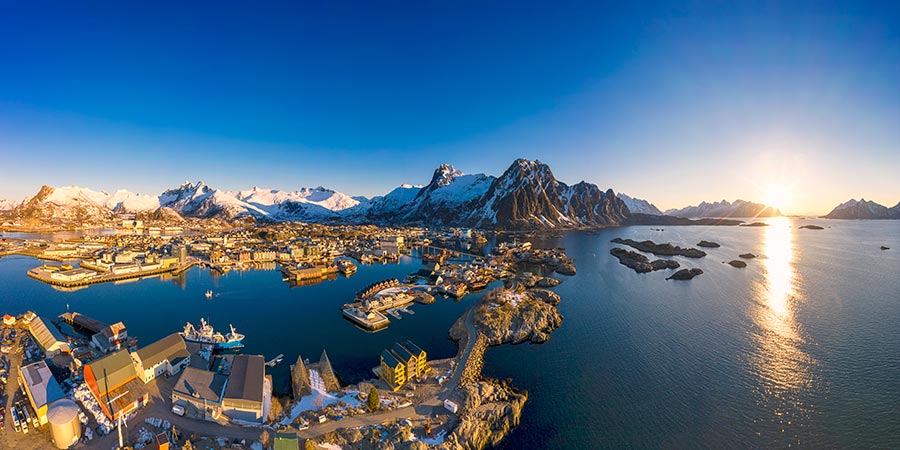 Our guide to Svolvaer
Local sites to see

Despite its compact size, the Lofoten War Memorial Museum contains Norway's largest collection of fascinating exhibits including uniforms, photographs, original drawings by Adolf Hitler, weapons and other artefacts from the Second World War.

A former fish-freezing plant has been transformed into one of the world's first permanent exhibitions of ice sculpture. Kept at a constant -6OC, this large building contains many sculptures and installations depicting everyday life, nature, tradition and culture in Lofoten, and there is also a bar at which warming spirits are served in glasses made from ice.

Established in 1970 and run entirely by volunteers, Svolvaer's own ski resort offers both mountain and off-piste ski runs for skiers of all abilities and has its own lift.

Svolvaer is home to many artists, and the North Norwegian Art Centre features exhibitions of artworks, sculptures, painting and ceramics from north Norway's artists on a regularly changing basis as well as providing a permanent gallery dedicated to Gunnar Berg; a nineteenth-century painter born in the town.