Despite its location just within the Arctic Circle, the meandering and pretty coastal city of Bodo in Norway's stunningly scenic Nordland region rarely experiences temperatures more than few degrees below zero even in the depths of winter. A relatively young destination, Bodo gained town status in 1816 as a fish trading and export centre intended to reduce northern Norway's reliance upon supplies from Bergen, some fifteen-hundred kilometres further south.

It wasn't until the 1870s that Bodo truly realised its ambition, when a boom in the herring trade not only saw the town's population grow from five hundred inhabitants to more than three thousand but also saw Bodo, now a city, established as an administrative and financial centre in its own right.

Prosperity and security remained for Bodo until May 27th 1940 when it was entirely destroyed by German bombing raids. Rebuilt from scratch in the decade following the end of the Second World War, Bodo has since re-established itself as an important hub of finance, commerce and communications, whilst the addition of an airport and the arrival of the railway has brought tourism to the city.

Today, Bodo is an excellent destination in which to experience the midnight sun between June and the beginning of July. Surrounded by mountains and numerous national parks the city is also a perfect base from which to explore Nordland's outstanding natural beauty and to observe the white-tailed or sea-eagle which commonly inhabits the area. 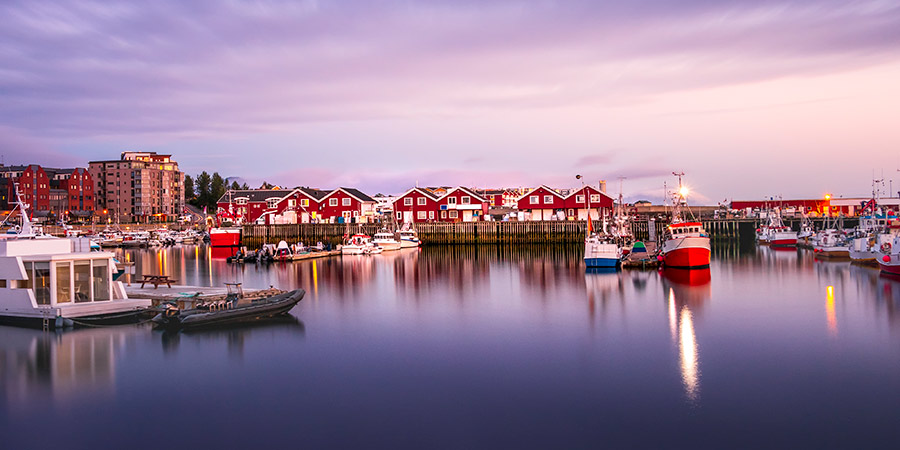 Our guide to Bodo
Local sites to see

Ten kilometres south of Bodo, Saltstraumen is the world's strongest tidal current and can be witnessed every six hours when up to four hundred million cubic metres of water powers its way through a narrow channel at speeds reaching twenty-five miles per hour. This maelstrom of water results in spectacular whirlpools up to ten metres in diameter.

Near Bodo's Nordlandshallen shopping mall, the large and fascinating Norwegian Aviation Museum (Norsk Luftfartsmuseum) is divided into two sections, one covering military aviation and the other civil aviation. These are separated by an observation tower from which visitors can view the departure and arrival of planes at Bodo's airport.