Running between the Norwegian cities of Trondheim and Bodø, the country's Nordland Line is its longest, stretching seven hundred and twenty-nine kilometers. It is the only train in Norway to cross the Arctic Circle making it the perfect choice for rail holidays. The journey features forty-four stations, two hundred and thirty nine bridges and one hundred and fifty four tunnels. The train departs twice a day from each end of the line, one departure during the day and also a night sleeper train featuring sleeping compartments.

The journey is a wonderful way to see the varying landscapes of Northern Norway, and delivers outstanding scenery throughout the year. 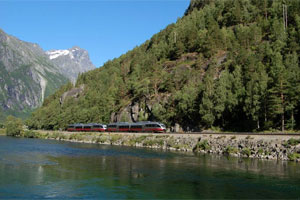 Unlike most other Norwegian railway lines, the Nordland line is not electric. The first part of the route to be built was the stretch between Trondheim and Hell, which opened in 1882. The building of the track continued to creep north, and had reached Mosjøen by 1940. During the Second World War, Norway was occupied by the Nazis, and construction of the line continued under their supervision.

The occupying German forces used the slave labor of prisoners of war. Nearly thirteen thousand Soviet and Yugoslav prisoners constructed the line between Mosjøen and Dunderland. During the Second World War the Nordland line was a target for saboteurs, the most famous of these is the destruction of a railway bridge near Snåsa. The bridge was completely destroyed, and just a few hours later a train carrying German troops crashed off the line, unaware of the bridges destruction. This crash is still the most deadly rail crash ever to have happened in the country. This led to the only fight between German and US troops in Norway during the war. There is now a war memorial at the site.

After the Second World War construction of the line continued and reached Fauske in 1958. The line finally reached Bodø in 1962.

The land of the Midnight sun 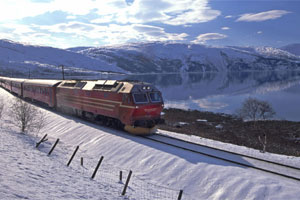 Today the railway's dark past is behind it, and it serves as an increasingly important route for Norway for both freight and passenger traffic. It has been estimated that almost 80% of all goods transported between southern Norway and Bodø is transported by rail.

The passenger trains usually consist of five passenger cars and a dining car, the night service has an additional two sleeper cars added to this. For travelers wishing to make the most of their journey there are a number of places of interest along the route. As you cross the Saltfjellet Mountain the train enters the Arctic Circle, at 66° north. Entering the Arctic Circle you are entering the land of the midnight sun. In the southernmost area the sun shines for twenty four hours a day during midsummer in June.

Bodø is the most northerly destination on the Nordland Line, and is a great place to make the most of the long hours of summer sunshine. It is also a great base from which to explore more of Norway. One excursion from Bodø takes you by ferry to the Lofoten islands, a collection of pretty fishing islands surrounded by spectacular scenery.  Lofoten is also the place you will have the most chance of catching a glimpse of the beautiful Aurora Borealis. The Northern Lights can usually be seen during winter, and from late autumn to early spring. The Arctic Circle Express is a wonderful choice for winter train holidays to see the Northern Lights.

For those wishing to undetake and Arctic adventure of their own, Great Rail Journeys offer escourted rail tours of Norway, allowing travellers to experience the beautiful country for themselves.