India has a rich and colourful history, and nowhere is this more evident than in their wide variety of festivals. From the Festival of Light to the Festival of Colour, we're looking at all the wonderful celebrations held in India today. Many of these festivals can be experienced as part of rail journeys in India, and to really get a feel for the country, we recommend our India's Golden Triangle tour. 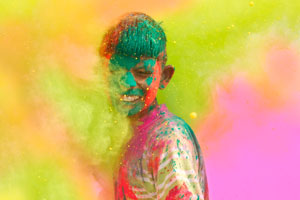 The Festival of Colour is one of the biggest festivals of the year for Hindus, and falls on the full moon at the end of February or the beginning of March. The origins of the festival are centred on the triumph of good over evil, but over time the meaning has changed and now Holi is a celebratory festival announcing the beginning of spring. Celebrated over two days, on the first day a bonfire is lit, and on the second day cities are lit up with colourful powder, music and celebration.

The literal meaning of the word 'Holi' is 'burning'. There are many legends which explain the meaning of Holi, but the most prominent one today is the legend associated with the demon king Hiranyakashyap. The demon king ordered his subjects to worship him instead of god. But his son, Prahlad was devoted to Vishnu. He continued to worship Vishnu, and not his father. King Hiranyakashyap tried to kill his son in many different ways, but Prahlad was protected by Vishnu. King Hiranyakashyap's sister, Holika, had the ability to enter fire without being harmed, so she took Prahlad into a bonfire. She didn't know her power only worked if she was alone, so she perished in the fire while Prahlad remained unharmed. The bonfire on the first day of Holi symbolises this event.

The second day of Holi celebrates the love of Rhada and Khrishnu. When Khrishnu was a child he was unhappy about his dark skin compared to Rhada's pale skin. His mother playfully told him that if he smeared colour on Rhada's face he could change her complexion to any colour he wanted. Intrigued by the idea, Khrishnu covered Rhada's face with colour, and introduced the colourful aspect of the festival of Holi.

Celebrated by Hindus, and increasingly non-Hindus, all over India, Holi is one of the most popular festivals, and in recent times has gained popularity all over the world. The Festival of Colour is a festival that has to be experienced to be fully appreciated.

Dahi Handi is celebrated in India in August, and involves participants, known as 'Govindas', creating tall human pyramids to reach and break a clay pot filled with curds. The origins of this festival come from stories of the god Krishna as a child. In order to steal curd and butter, Krishna and his friends would create human pyramids to reach pots hung from ceilings of neighbourhood houses. They would break the pots and steal the contents. Krishna would then distribute the contents to his friends, because his village was under orders to give everything they produced to the king. This meant the children of his village were deprived of milk products.

Govindas form human pyramids, and aim to break as many pots as possible during the festival. Pots could contain butter, curds, sweets, and sometimes prize money. 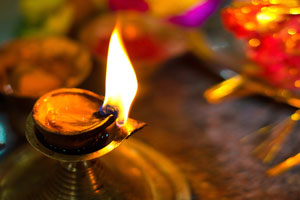 Diwali is the Hindu Festival of Lights, and to millions of Hindu's all over the world symbolises the triumph of good over evil. It is one of the largest and most important festivals in India. Celebrated in late autumn, it falls somewhere between October and November, on a moonless night. Hindus decorate their homes with garlands of fragrant Jasmin, and decorate the ground outside their house with coloured sand.

The story of Diwali originated in India thousands of years ago, and centres on the King, 'Lord Rama'. Rama's father exiled him at the request of Rama's step mother who wished her own son to take the throne. Rama's wife, Sita, and his brother, Lakshman, accompanied him during his exile. Sita was kidnapped by the evil Ravana and taken to his home in Lanka. To rescue Sita, Rama was assisted by the monkey warrior Hanuman. They fought a war between good and evil, during which Rama pierced the heart of Ravana with a golden arrow. After fourteen years of exile, Lord Rama, Sita and Lakshman returned home, and the people of their kingdom lit the path out of the forest so they could find their way back.

The Diwali celebrations include sharing food - neighbours share home-cooked treats - and families celebrating being together. Cities are lit up with colourful lights and fireworks. Lasting five days in total, Diwali is a wonderfully bright and colourful festival.

This elaborate eleven day festival celebrates the birth of the Hindu elephant god, Lord Ganesha. During the festival, huge, elaborate statues of Ganesha are installed in homes. The statue is worshipped and anointed over a period of ten days. On the eleventh day of the festival, the statues are paraded through the streets accompanied by singing and dancing. The statues are then submerged in a river or the ocean. This symbolic action represents seeing-off the Lord Ganesha towards his home while he takes with him all the misfortunes of man.

Lord Ganesha is renowned for his ability to bring good fortune and remove obstacles, so this is an important festival in India. Celebrated between August and September, depending on the moon.

Experiencing India by rail is certainly one of the world's great railway journeys. India has a rich culture and history, and to really appreciate the country in all its glory, Great Rail Journeys offer wonderful railway journeys in India.

The Nordland line is Norway’s longest railway, and the only line to cross the Arctic Circle. Experience the beauty on your own Arctic adventure.