The Rocky Mountaineer is often listed among the world's top trains due to the spectacular, ever-changing scenery on the route and the luxury experience enjoyed by passengers. Travelling from Vancouver on a Canada rail holiday, there are four routes to choose from through British Columbia and Alberta: Vancouver to Whistler, Calgary, or Jasper, or an expedition from Jasper to Whistler via Quesnel.

The Rocky Mountaineer offers two different levels of service. In Silver Leaf, travellers sit in a single level dome coach with almost 180˚ panoramic views. In the Rocky Mountaineer's award winning Gold Leaf service, each gold leaf carriage has an open car to allow passengers to immerse themselves in the wilderness; this open carriage is perfect for taking photos. The Gold Leaf carriages have a two story design, with the upper level featuring a glass domed ceiling for panoramic views. Downstairs, the dining room serves gourmet a la carte meals.

The Journey: Rockies by train 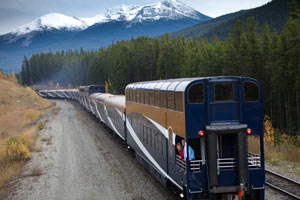 On the Vancouver to Calgary route, the luxury train pulls out of the city of Vancouver, into the mountains, and towards its overnight stop, Kamloops. A highlight of day one is the Cisco Crossing, named after the local first nation's people. Two bridges cross the Fraser River at the same location. The Canadian Pacific Bridge was built in England in the 1880s, and the Canadian National Bridge is the largest single span bridge on the route.

As the Rocky Mountaineer continues along the tracks, it reaches the confluence of the Fraser and Thompson rivers. The train then leaves the mountain vistas behind and moves into the Thompson Plateau. This is one of the warmest and driest regions in Canada. The Rocky Mountaineer then journeys into Rainbow Canyon, which gets its name from the huge amount of colours that can be seen reflected in the rocks. Passengers should look out for the 'hoodoos' - tall skinny spires of rock that protrude from the dry arid surroundings of the Thompson Plateau. Local mythology describes these as giants that were turned to stone by the Great Spirit.

The journey continues into Kamloops, famous originally for its fur trade, then as a mining boom town and finally, ranchers settled here. The train continues its journeys from Kamloops and heads further north through Canada. Another major landmark to look out for here is Craigellachie, a monument to the completion of Canada's transcontinental railway in 1885.

The route crosses many bridges as the train climbs up into Canada's Rocky Mountains. Spanning 480ft, the Stoney Creek Bridge is the highest bridge of the journey. Another great feat of engineering are the Spiral Tunnels, just outside the town of Field. Built in 1884, the tunnels steeply wind their way down the mountain. The original 4.5 percent grade track down the mountain caused the first train down to de-rail. In the early 1900s engineers had to build the series of winding tunnels and track to lessen the grade, and make the journey safer. Using dynamite to blast through the mountains, the planning was so precise, that when workers from both sides met in the middle the track joined with an error margin of less than two centimeters.

The highest point of The Rocky Mountaineer's journey reaches five-thousand three-hundred and thirty-two feet, at the continental divide. As the train travels through the Canadian Rockies the train pulls into its final destination of Banff. 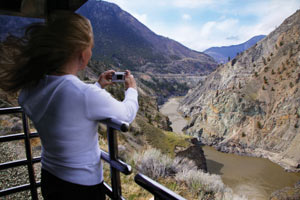 Along the route, travellers witness breathtaking landscapes, from mighty rivers and snow-capped mountains, to dense pine forests and native wildlife. Passengers could get the chance to see mountain goats perched precariously on high rock faces, and birds of prey like eagles and ospreys, patrolling the skies. The Canadian Rockies are also home to caribou, cougars, coyotes, and wolves, but these animals are notoriously shy. The lucky few will catch a glimpse of one of Canada's two native bear species, wandering along the tracks - if a bear is spotted the train slows down for passengers to get a better look.

A journey on the Rocky Mountaineer is truly one of the greatest train journeys in the world. From the award winning service to the breathtaking scenery, it's no wonder many people choose to experience this trip more than once.

Music tours in the USA will take you through the historic city of Nashville, Tennessee, the place that music calls home.