The founding of Nashville 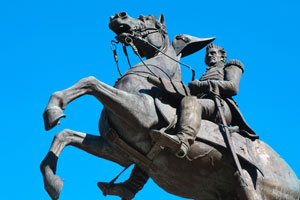 Nashville can trace its European roots back to French fur traders in the 18th century. The fur traders established a trading post in 1717, and in 1780 around sixty families arrived and set up a new town, which they named Nashville. The name was chosen in honor of General Francis Nash, who played an important part in the American Revolution.

The new town quickly developed as an important cotton trading hub, thanks to its river connections and later, railroad connections. The town of Nashville quickly became the commercial center of the Middle Tennessee region. Twenty years after the first settlement was set up, Nashville had three-hundred and forty-five residents. In 1806 Nashville was chartered as a city. The first major project undertaken by the city was the building of the Nashville Water Works, based around a reservoir to the south of the city. Water was pumped from the Cumberland River into the reservoir by a steam engine, which is still in use today. Nashville was selected as the capital of the state of Tennessee in 1843.

In 1861, the state of Tennessee was the last state to join the Confederacy before the American Civil War. Nashville's desirable transport links made the city a key target for Union forces. When it became apparent Confederate troops couldn't hold Nashville, the city was evacuated and citizens were advised to burn their private property. In 1862, Nashville became the first state capital captured by Union troops.

During the American Civil War, Nashville, with its many job opportunities, drew refugees from both sides, as well as escaped slaves and businessmen from the North. After the war people continued to flock to Nashville, and the population had grown from around 16,988 in 1860, to around 80,865 by 1900.

The city that music calls home 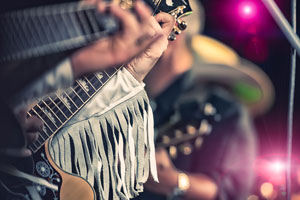 Nashville was the first city in the US to broadcast an FM Radio station in 1941, but Nashville's famous musical heritage began long before that. During the 1800s, Nashville became a national centre for music publishing. The Fisk Jubilee Singers, from Nashville's Frisk University, were the first musicians to undertake a round-the-world tour. They performed for the Queen of England who is reported to have said they must come from the 'Music City'.

After the Second World War Nashville became the home of music entrepreneurs such as Roy Acuff. The Grand Old Opry, a weekly country music concert in Nashville, was founded in 1925 by George D. Hay, and was advertised as a one-hour radio 'barn dance'. Still broadcasting today, it has earned the title of America's longest-running radio broadcast. Dedicated to showcasing upcoming, and established stars of the genre, as well as other genres such as bluegrass, folk, gospel and comedy. The tagline of The Grand Old Opry is, 'The Show That Made Country Music Famous'. Now running for eighty-five years, it has kick started the careers of many of today's biggest country music stars.

Live music can be heard every day and night, three-hundred and sixty-five days a year in Nashville. The world famous honky-tonks, located on Nashville's Broadway, offer free music every night of the week. Nashville is home to over one-hundred and thirty music venues of all sizes, giving it the nickname of the city that 'music calls home'.

If you're considering taking a holiday in the USA, Great Rail Journeys offer some breath-taking USA holiday tours.

A trip through Canada’s Rocky Mountains on the Rocky Mountaineer is breathtaking. From the first class service to the awe-inspiring views.