Nestled off the far north coast of Scotland, where the North Sea meets the Atlantic Ocean, the Orkney Islands are like no other place in the world. Inhabited for at least 8,500 years and ruled over by both Norse and Scottish settlers, the islands hold stories and myths of pirates and battles aplenty. The most evident still today, rising out of the water at Scapa Flow, are the remnants of Churchill's sunken warships. To fully appreciate the beauty, tranquillity and isolation of Orkney, you need to go to Orkney.

There is no other place in the world quite the same as this small archipelago, huddled between two oceans and steadfast against the tides. First time visitors will feel a sense of mystery and otherworldliness when they notice the complete absence of trees. But the feel of Orkney will sink in instantaneously. It is a sense of calm only experienced on islands as small and remote of these. Another fascination for visitors are the so-called 'night-less' summers. On the longest day of the year the sun rises at 3am and sets at 9:29pm. And night time is more accurately described as perpetual twilight, instead of complete darkness. In contrast, winter nights are long. On the shortest day the sun rises at 9:05am and sets at 3:16pm.

Orkney consists of around seventy islands, the residents of Orkney refer to their principle island as 'Mainland', and the national mainland as 'Scotland'. This demonstrates the pride of Orcadians in their small community, whose way of life still isn't totally in sync with the rest of the UK. The islanders welcome visitors (or 'ferry-loopers' as non-orcadians are called), so train holidays in Scotland are the perfect opportunity to see these beautiful, isolated islands.

Arcaibh – Home of the Celtic Nations 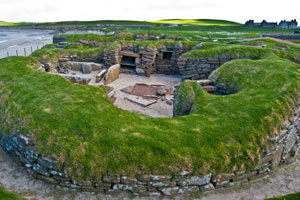 Skara Brae is a Neolithic settlement on the west coast of Mainland. In 1850, a severe winter storm tore into the Bay of Skaill to reveal a small settlement. Rumours began of hidden treasures, and in 1913 the site was raided by treasure hunters. It is not known what they might have taken away, but it's almost certain they didn't find treasure. In 1924, another storm caused damage to the settlement and it was decided that it would be properly protected from the weather and professionally excavated. The extent of the settlement was finally revealed, and the work was followed up by more investigation in the 1970s. The settlement of Skara Brae dates back to 3180BCE, making it contemporary with the first and second dynasties in Egypt. Today you can walk through this ancient collection of houses and get a feel for what life was like on the islands five thousand years ago. The visitor centre at Skara Brae houses a wealth of information, and the staff are always willing to share their enthusiasm with visitors.

The Orkney Islands were the headquarters for Vikings pirate expeditions. The islands were under Norwegian rule until 1468, when they were betrothed to King James III of Scotland as part of a dowry. In the 18th century, during the Jacobite Rising, Orkney was Jacobite in its sympathies. It was finally retaken by the British in 1746.

During the 1st and 2nd World Wars, Orkney was an important Royal Navy base. Remnants of the wars can still be seen at the Churchill Barriers, where block ships were deliberately sunk to deter submarine attacks. Today, parts of these scuttled ships jut mysteriously out of the water and are a magnet for scuba divers of all abilities. 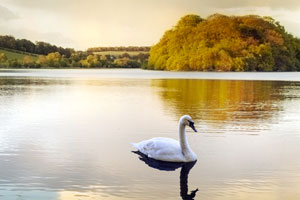 Under an ancient Norse law, unlike the rest of Great Britain, swans in the Orkney Islands do not belong to the crown, they are property of the people. This law was tested in 1910 by a lawyer from Kirkwall, who shot a swan. The case was taken to the High Court and the Crown lost. Orcadians do not shoot swans today, but there is a myriad of other local delights available.

Orkneys local delicacies are numerous, but the two things you must try, are fresh Orkney scallops and lamb reared on North Ronaldsay. Orkney scallops are wild, not farmed, and are mostly hand dived. Due to their quality and size, Orkney scallops are becoming more and more popular all over the world. Sheep bred on the small island of North Ronaldsay have a distinctive flavour, unequalled anywhere in the world. To preserve the inshore grasslands, the sheep are limited to the outer shores of the island. Here they feed almost exclusively on seaweed, giving their meat a distinctive flavour much prized by chefs.

The islands are also famous for their whisky, with its Scapa distillery winning the accolade of best in the world. Orkney is home to two distilleries, and they own the title of most northerly distilleries in the world.

The Orkney Islands really must be experienced to be believed and train holidays to Scotland are the perfect opportunity to make the short trip further north.