Loch Ness is part of the Great Glen or Glen Mor in Gaelic, a scar-like fault line that runs over 60 miles from Inverness in the north to Fort William in the south. It is made up of three lochs - Loch Lochy, Loch Oich and Loch Ness - with Loch Ness being by far the largest with a surface area of 56.4 square km (21.8 square miles).

Although Nessie was sighted as far back as the 6th century AD it is the modern day sightings that have captured the public imagination. In the early part of the 1930s a new road was built around Loch Ness that in turn brought in a spate of new sightings from drivers and sightseers.

Spotting Nessie
The first recorded sighting of Nessie on land was made by Mr Spicer and his wife, on July 22nd 1933, while driving down the road between the Loch Ness side-villages of Dores and Inverfarigaig. They caught sight of a large cumbersome animal crossing the road ahead, which was some 20 yards from the water. They first saw a long neck, forming a number of arches, a little thicker than an elephant's trunk and a huge lumbering body heading towards the Loch. It disappeared into the bushes out of sight. After this sighting, reports flooded in and interest grew on an international scale. Speculators offered huge prizes for the animal - dead or alive. Circus owner Bertram Mills promised a sum of £20,000 to any man who could bring the creature alive to his circus.  Take this opportunity while in Loch Ness to spend a little of your time "monster-spotting". 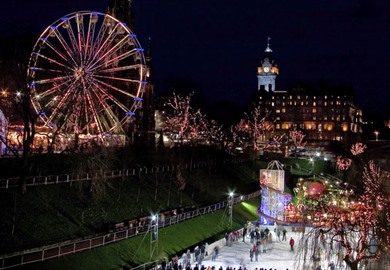 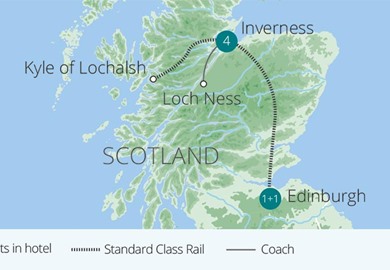 “I was really pleased that I made the decision to take this trip. The group, smaller than it would have been, gelled really well. I think we were let down by ScotRail. The tour manager was very efficient and helpful. The hotel in Edinburgh was much more geared up to deal with my having Coeliac disease and therefore follow a gluten free diet but I was rather disappointed by the attitude of the hotel in Inverness who did not seem to be prepared although I had advised of my special diet on booking and I cannot believe that I was the only guest in the hotel who had this need. I enjoyed the excursions on Christmas Eve and Boxing Day.
Collected by Trustpilot