South Africa's cultural capital is one of the most vibrant destinations in Africa. It is surrounded by stunning beaches, expansive vineyards, lush farmland and, of course, the iconic Table Mountain. Riding the Table Mountain Aerial Cableway is, for many, the highlight of any South Africa tour. Over the centuries, Table Mountain (1,086 metres or 3,563 feet) has become one of South Africa's most famous landmarks.

The steep cliffs and rocky outcrops of Table Mountain are home to a number of different animals and plants. Complementing the vast array of flora is a stunning range of fauna, some, like the Table Mountain Ghost Frog, found in no other place in the world. The oldest existing building in South Africa, Cape Town Castle, was built in 1666 to protect the new settlement at the Cape. Still operational as a military base, today its five imposing stone walls also house a museum with artefacts dating back to the 17th century, and troops dressed in historic uniform parade on its cobbled grounds.

Nearby, across the Grand Parade, stand the Drill Hall and Cape Town's Italian Renaissance-style City Hall, completed in 1905. The Slave Lodge, the second oldest building in Cape Town, has served many purposes in its nearly three centuries. Originally built as accommodation for the slaves of the Dutch East India Company, it was also Cape Town's first post office, a library, and the Supreme Court. Today it is home to the South African Cultural History Museum - also known as the Slave Lodge Museum - and its displays of ceramics, toys, silver and textiles from Cape Town's past, as well as artefacts from ancient Egypt, Greece and Rome. 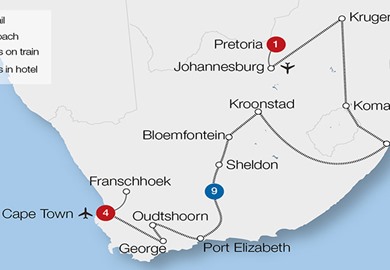 Island, a UNESCO World Heritage Site, is after Alcatraz possibly the best known prison island in the world. Having served over the centuries as a penal settlement, leper colony and lunatic asylum, its notoriety has, more recently, centred around the fact that President Nelson Mandela and many of his colleagues were imprisoned here during the final years of the apartheid regime.