India is a diverse country, its landscapes are as varied as its people. Regardless of the differences, India is united by colour. In this series dedicated to the launch of our beautiful India in Colour infographic, we will look at each colour associated to India and explore its religious and cultural significance. In the first instalment, we look at the colour green. 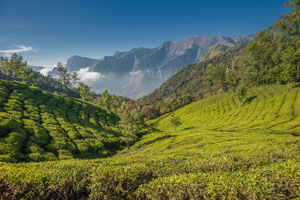 Green is an important colour throughout India, symbolising new beginnings. The colour epitomises nature and is believed to be the colour of god himself - a much revered colour in Islam. One folk tale tells the story of the blue of the sky and the golden yellow of the sun combining to create the colour green, which then spread out across all of nature. In an agricultural country like India, green is synonymous with life and growth.

Green is deeply connected to the Indian agricultural society, and central to south Asian Islamic imagery. India's monsoon season arrives after the long dry period, with the rain bringing new life to the green dominated landscape. 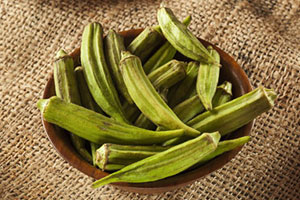 In a country with such a diverse range of cultures and traditions, symbolism begin to overlap. Many of the different festivals throughout India are celebrated around the same time. In the same week, Indians celebrate the festival of Eid al-Fitr and Haryali Teej, both of these celebrate the colour green and the beginning of monsoon season. A luxury train tour of India during this season will allow you to experience some of India's most traditional festivals and give you a glimpse into the country's ancient cultures.

These two festivals are held in the more fertile south Rajasthan. Teej is the collective name for the monsoon festivals. The celebration of Haryali Teej used to be spread out over two days; one day was traditionally only for women and the second day was traditionally only for men. The women would wear green saris' and bangles to celebrate the monsoon rains turning the land green. Today, the traditions have fallen out of fashion and now women and men attend both days.

Rajasthan, in northwest India has a desert climate and is home to the Indian Thar Desert. This region receives less than 400mm of rain each year on average. Communities who live in this region believe their green trees and plants are sacred, they stand out as an oasis of life in the stark, dry desert landscape. A wonderful way to experience the diversity of this country, and see for yourself how the landscape changes, is by taking train tours of India.

The colour of paradise 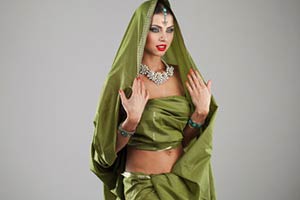 Kashmir in northern India is a largely Muslim region. Muslims believe the prophet Muhammed described green as the colour of nature, thus making it an important colour in Islam. Green is used in buildings, with domes of roofs often painted green. It is believed the prophet Muhammed and his companions wore green, the Arabic word for 'greenness' is used several times in the Koran to describe the inhabitants of paradise; and is subsequently regarded as the colour of paradise.

Green is written about throughout Indian poetry, songs and traditional stories.  These celebrate the land turning green and becoming fertile once more after the dry season. The Indian national flag is a horizontal, tri-colour design with equal proportions of deep saffron on the top, white in the centre and green at the bottom. Adopted as the country's flag in 1947 after India became independent from Britain, each colour symbolises something different. The green of the flag symbolises agriculture, prosperity, faith and fertility.

Traditional Indian theatrical performances feature actors with colourfully painted faces, in these performances green is used to depict characters who are the heroes. 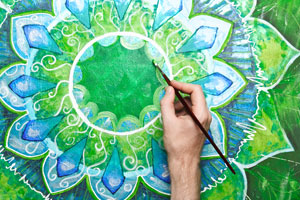 In traditional Hindu and Buddhist traditional belief systems the chakras are referred to as an energy point in the 'subtle body'. They are described as energy points which run through the spiritual body, and illness was believed to be caused by this flow of energy becoming blocked. The heart chakra is considered to be the body's centre, this chakra is represented as green. The green heart chakra is believed to be the core chakra, the point at which earth and spiritual chakras are joined and equalised. It is believed that nothing can be created without first moving through the central chakra of the heart.

Experience India's life of green for yourself on stunning Indian train tours, designed to allow you to discover the wonderful beauty and traditions of India, with Great Rail Journeys.

Our beautiful India in Colour infographic brings together some of the most important colours of this diverse, beautiful country to give you a taste of the colourful journey that awaits.

What colour will your journey be?