Zell am See is one of the most scenic and well-loved 'lakes and mountains' resorts in Austria. Beautifully located, directly on the shores of Zeller Lake (Lake Zell), it has the added advantage of being close to the Hohe Tauern Mountains and the magnificent Grossglockner Mountains. It is believed that the area was inhabited before Roman times, though very little is known of the town before about 740 AD. It was at about this time that 'Cell' residences were built for the region's monks, and it was from these lakeside dwellings that the town takes its name.

Zell was given the status of a market town in 1358 and today the town still has much of its medieval charm, along with a clutch of tight, cobbled streets, the 16th century town hall, and the Stadtpfarr Church. Most of the medieval center, with its wealth of shops and attractive pavement cafés, is a traffic-free area. With the coming of the railroad in the 19th century, Zell am See's potential as a gateway to the spectacular scenery surrounding it was finally realised, and tourists began to flock here. In particular, the town developed as a key ski resort. 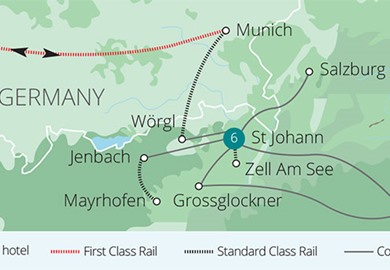 “Great Rail Journeys were faultless throughout, however, on the journey from Brussels to Austria the German railroad system was abysmal. Both legs of the trip (Brussels to Cologne, and then Cologne to Munich ) were plagued with delays and two major engine failure on the locomotive. When we arrived in Austria everything was brilliant, great hotel, excellent food, friendly staff and a well organised and enjoyable itinerary. The GRJ tour manager Steven was amazing,
Collected by Great Rail Journeys

Of course, the main attraction is the emerald lake itself, which is two-and-a-half miles (four kilometres) long and 0.6 miles (over one kilometre) wide. From here you can join a number of leisurely boat trips, which call at various pretty hamlets along the way. St Hippolyte Church is the town center's most popular visitor attractions, built during the medieval period before the town became known for its skiing facilities. St Hippolyte was renovated during the 18th and 19th centuries, much of the gothic ornamentation of this church dates from 1898, but the attractive 15th and 16th century statues of many key religious figures still remain.

Another key attraction of the town is the Vogturm, a medieval tower that houses a museum detailing the fascinating history of the region, including the devil masks still worn by locals each December. With a host of attractions and easily accessible mountain scenery, Zell am See continues to delight tourists from all over the world.