The Grand Canyon is one of the seven natural wonders of the world, and a must see on every tour of the USA. Beginning at Williams, a sleepy Arizona town, the railroad travels the 60 miles to the Grand Canyon National Park, on the South Rim of the Grand Canyon.

History of the railway 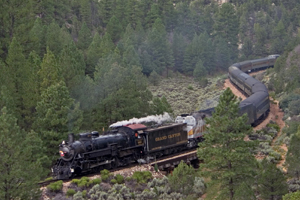 At the beginning of the 20th century roads into the Grand Canyon were virtually non-existent and difficult to travel on. Horse drawn carriages were sometimes used, but it was always a long and difficult journey. This meant that only a few adventurous explorers managed to rough the elements and reach the remote location.

The railroad was initially built in the late 1800s to transport ore from the Anita mines that lay 45 miles north of Williams. It wasn't long before the potential of the Grand Canyon was noted, and Buckey O'Neil, sheriff, mayor and prospector saw the potential of extending the tracks. He entered into conversations with the Santa Fe Pacific Railroad and New York based investment firm Lombard, Goode and Company. He sent Santa Fe samples of gold he claimed to have found in the canyon, and in the same letter mentioned the natural beauty of the canyon and the potential for tourism.

O'Neil gained the investments he needed and work began on the Grand Canyon Railroad. The Grand Canyon Railway made its first journey in 1901. However, the lure of gold and ore from the canyon ultimately proved unsustainable. The company soon realised they could make a return on their investment through tourism. The cheaper, smoother and faster train ride to the canyon quickly replaced the eight hour stagecoach ride. The arrival of the train meant people could now reach the legendary canyon with ease and in comfort. People flocked to visit the Grand Canyon and the fleet of trains was expanded to accommodate the increasing demand. Visitors from all over the world came to experience the awe of the Grand Canyon for themselves.

The Santa Fe realised if they were now bringing people to the canyon, they would need facilities when they arrived. The first passengers to arrive in 1901 were greeted by tent camps along the rim. The company began building its resort to accommodate the thousands of visitors they were now receiving. The Santa Fe, in a move considered progressive for the 1900s, hired a woman, Mary Elizabeth Jane Colter, to design many of the buildings. These still stand today in the Grand Canyon National Park.

Outlaws and the law 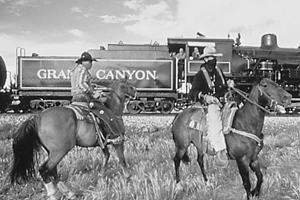 In 1968 the Grand Canyon Railway passenger train almost came to an end as the popularity of the automobile increased and USA rail trips had fallen from favour. People in the 1960s had fallen in love with 'the road trip' after the completion of the interstate highway system had been completed. The line continued to be used until 1974, but only for freight transport. However, in 1988 the service was purchased by two entrepreneurs and train enthusiasts. They wanted to preserve the history of the golden age of train travel, and bring some of America's history back to life. The passenger train recommenced service on 17th September 1989, to commemorate the original 17th September debut of the original train.

The train pulls restored 1950s carriages with three choices of seating. Passengers can choose to experience 50s style coach class, roomy first class or sit in the observation dome which includes a champagne toast. There is also the chance to be a rail barren for the day and ride in parlor class, with its own private bar, open rear observation platform and entertainment from musicians performing songs from the early 20th century.

The scenery passengers see during a journey on the Grand Canyon Railway is much the same as that seen by the first travellers on this route. Passengers can sit back and immerse themselves in the history of the train. But travellers should be cautious of train robbers and bandits, common on the route in the 19th century. These 'hijackers' are known to stop the train looking to steal gold and jewels. Travellers can rest assured though, as the Sheriff and his band of law enforcers are always close behind. This is an immersive history lesson for anyone wanting to experience a taste of life in the Wild West.

USA tour holidays to the Grand Canyon National Park are becoming increasingly popular thanks to the spectacular, awe inspiring draw of the canyon. Our escorted railway tours of the USA are a wonderful way to immerse yourself in the culture of our cousins across the pond.