Winding its way one hundred and eighty miles through the magnificent mountains of Switzerland, the Glacier Express is one of the most iconic trains in the world. The line was built to take advantage of Edwardian tourists wanting to see the rustic charms of the Swiss Alps.

The journey from St Moritz to Zermatt takes around eight hours, crosses 291 bridges and goes through 91 tunnels. For the entire journey the train runs on a narrow gauge track, only a metre wide. Because of the steep ascents and descents needed to traverse the Alps, large portions of the track use a rack-and-pinion system. This system involves a toothed rack between the rails and a cogwheel underneath the train; at the steepest points these provide the train with extra grip. The highest point along the route is the 6,669ft Oberalp Pass, and due to the altitude of the mountains it winds through, the train travels at an average of around 24 miles an hour. 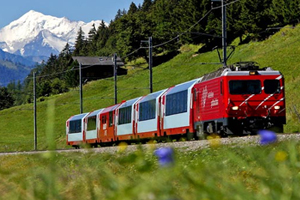 In the 1920s, adventurous travellers from all over the world began to discover the Swiss Alps. Remote mountain villages like Zermatt and St. Moritz remodeled themselves as desirable vacation destinations. New routes were opened up by the three large Swiss railway companies to take advantage of this new tourism boom, and Glacier Express holidays became popular.

The Glacier Express made its first complete journey from Zermatt to St. Moritz in 1930. For fifty-two years, until 1982, the complete line was only able to operate during the summer months. In winter, snow at the Oberalp Pass and Furka Pass made the route impassable.

The first trains that made the journey catered for the luxury tastes of the time, with elegant saloon coaches, passenger coaches from 1st to 3rd class and dining cars. In the 1950s faster engines were introduced to shorten travelling times, though the Glacier Express is still known as 'the world's slowest express train'.

Treacherous winter conditions meant the line was only serviceable in summer, so in 1973 work was begun on the Furka base tunnel. This tunnel connects Oberwald and Realp, and enables the Glacier Express to run year round. 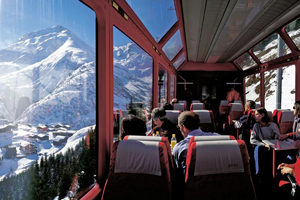 Today the Glacier Express can be spotted winding through the Alps thanks to its distinctive red and white colours - to match the Swiss flag. The windows of the Glacier Express are domed, giving an almost 180 degree view of the spectacular landscape, passing by untouched mountain landscapes, deep gorges, pretty valleys and glamorous health resorts. In 2015 the Glacier Express celebrates its 85th anniversary, and its popularity is growing. It's estimated that more than 250,000 people take the journey every year.

During the eight hour trip on the Glacier Express, passengers can enjoy meals served at their table, and sit back and relax while they take in the stunning panoramic views of one of the most spectacular train journeys in the world. The Glacier Express is equally popular with skiers, train enthusiasts and holiday makers. Glacier Express tours are a wonderful way to take in Switzerland's awe-inspiring landscapes, and the trip is popular all year round.

If you want to be left breathless by the Glacier Express, Great Rail Journeys offer escorted rail tours all year round.