A tour of Yorkshire would not be complete without a visit to the seaside town of Whitby, which lies on the North Yorkshire coastline and is famous as the home town of Captain James Cook. You can visit Whitby by train on a rail holiday with Great Rail Journeys, as part of a tour of Yorkshire and Northumberland. The town has been immortalised is Bram Stoker's Dracula - it is where Dracula arrived in Britain in the author's famous novel.

You can travel to Whitby by train on the famous North Yorkshire Moors Railway (NYMR). This wonderful, private heritage railway operates between Pickering and Whitby, running several services a day between the town towns and stopping en route at a number of smaller, village stations including Grosmont and Levisham. In fact, when you travel to Whitby by train on the NYMR, you will pass through 'Heartbeat country' - the village of Goathland was called 'Aidensfield' when it featured in the long-running ITV drama.

On a rail holiday to Whitby you can visit the North Yorkshire seaside town's beautiful cliff-top abbey, which stands proudly above the beach and overlooks the harbour. From the harbour there are 199 steps to reach the Abbey.

While on a rail holiday to Whitby you could enjoy a ghost walk through the ancient haunted streets of the town. It is reported that Whitby's Old Town can be a strange, creepy place once darkness has fallen, with plenty of unnerving incidents having taken place there. If you prefer vampires to ghosts, you could pass the free time on your rail holiday to Whitby with a "Dracula experience", which includes a walk through a tunnel that has been adapted to be like Dracula's castle.

Other possible activities during a rail holiday to Whitby include a visit to the Captain Cook Museum and a meal of fish and chips at the world-famous Magpie Café. 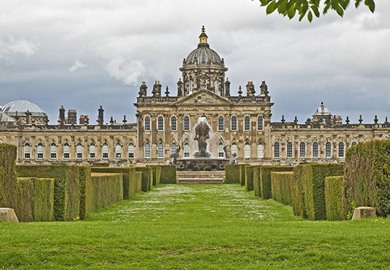 “Good holiday although a couple of alterations would be advantageous e.g visit Harlow Carr in the afternoon instead of morning and catch an earlier N Yorks Moors train as the last part of our journey was in the dark and we returned very late to the hotel. It was well organised, both hotels were satisfactory and the food in the Crowne Plaza in Harrogate was excellent especially the choice at breakfast. There were some very nice excursions with enthusiastic local guides
Collected by Trustpilot
Latest articles from our journey blog

The recent Bank Holiday weekend meant only one thing: Tour de Yorkshire 2019 was in full swing!