Fountains Abbey is the surviving section of a ruined Cistercian monastery in North Yorkshire, close to the market town of Ripon. It is one of the largest Cistercian houses in England and, together with Studley Royal Park, has been awarded UNESCO World Heritage Status. Although in ruins, the abbey is still one of the largest and best preserved Cistercian Houses in England, and as such it is a Grade I listed building, now owned by the National Trust.

The monastery was founded in 1132 following a dispute at St Mary's Abbey in York, approximately 30 miles to the south. Thirteen monks were promptly exiled. But with the protection and assistance of the Archbishop of York, these monks found their favoured spot for a new religious house in the Skell Valley. Here they constructed their unique masterpiece of ancient architectural craftsmanship, built from stone quarried locally. Within three years Fountains Abbey had been accepted into the Cistercian Order, and lay brothers were appointed to tend to and to cultivate the land (at this time, the abbey's vast lands expanded almost into the Lake District). 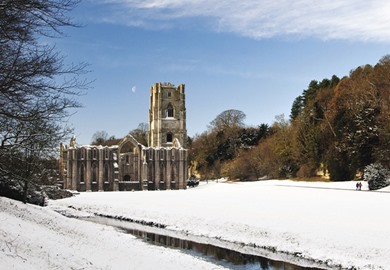 Fountains Abbey and its farmland became a massive success, meaning that the monks and laymen generated not only self-sufficiency, but also a great wealth. The monastery operated in much the same way for 400 years before Henry VIII's Dissolution of the Monasteries brought everything to an abrupt end in 1539. As the abbey was such a magnificent building, it was hoped it would instead become a cathedral; however, this was not a viable position for King Henry when trying to establish his new Church of England. The stained glass windows were taken and the building was left to go to ruin. Yet as the abbey was so large, more of it has survived than most of the monasteries that suffered the same fate.

In the late 18th century the land around Fountains Abbey was made into beautifully landscaped gardens, and the building was set as a folly to maximise its evident beauty. It has been a firm favourite with visitors ever since.

Yorkshire has been awarded the accolade of 'United Kingdom's Leading Holiday Destination' at the prestigious World Travel Awards.