The Venice Simplon-Orient-Express conjures up visions of decadence and luxury, but how was this image created and what has caused it to be so ingrained in our culture today? This iconic train has been carrying passengers in luxury since 1883 when it set out on its first journey from Paris. A lot has changed since 1883, but the modern incarnation of the Venice Simplon-Orient-Express maintains its air of the high life. Stories of Royal demands, spies and the role it played during two world wars only add to the charm of this famous journey. 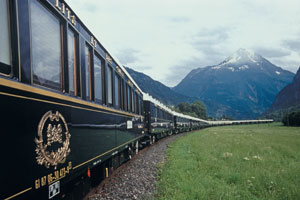 In 1865 Georges Nagelmackers envisioned, 'a train that would span a continent, running on a continuous ribbon of metal for more than 1,500 miles.' Nagelmackers' vision was encouraged during a trip to America where he saw firsthand advances being made in railway travel. One of the most influential things he saw were George Pullman's luxurious 'sleeper cars', these inspired Nagelmackers to realise his vision.

On October 4th 1865, the luxury train made its first journey from Paris's Gare de Strasbourg. Invited on this journey were many journalists who marveled at the luxury and attention to detail, and thus the image of extravagance and decadence was born.

Royalty on the Orient Express

Owing to its reputation for decadence and luxury, over the years the luxury train has hosted many royals, some of whom made absurd demands for their journey. Notably, terrified of assassins, the Ferdinand of Belgium locked himself in the bathroom for the duration of his trip. After making elaborate arrangements to infiltrate a harem, King Leopold II chose the train as his means of travel to Turkey. The train was driven at dangerous speed through Bulgaria by the country's king. Special cars were built for the train at the demand of Czar Nicholas II.

Literature on the Orient Express

The glamour and rich history of this decadent train has ingrained itself in popular culture, and often lends itself to the plot of books, films and television programs. First mentioned in literature by Bram Stoker in 1897, the train would go on to be featured by many other great writers including Graham Greene and Ian Flemming.

Perhaps the most famous novel about the train features Agatha Christie's Belgian detective, Hercule Poirot. Poirot solved his most famous mystery aboard the Simplon Orient Express, this popular murder mystery has been adapted for the big screen on three separate occasions. Another notable tale set on this line was Alfred Hitchcock's film adaptation, The Lady Vanishes. More recently the train has been featured in From Russia with Love, where much of the action sees Sean Connery's Bond aboard the Orient Express. Series eight of the popular British sci-fi series Doctor Who also featured the iconic train, albeit this incarnation is located in space.

Since its beginning writers have been inspired by the idea of this iconic journey, and as its history becomes richer with time there is no doubt it will continue to inspire future generations.

Spies on the Orient Express

The Orient Express once earned the nickname 'Spies Express' as it became the favoured means of travel for continent spanning spies. One of the most well-known spies to enjoy the luxury of this journey was British spy, Robert Baden-Powell. Powell posed as a lepidopterist visiting the Balkans to collect samples. He drew intricate sketches of butterfly wings that cleverly concealed coded plans of fortifications he observed along the Dalmatian Coast.

The route was severely limited during the two World Wars, however a single carriage played a part in both. At the end of the First World War German officers signed a surrender document in a sleeping car of the Orient Express that was used by the Allies as a mobile conference room. This car was then proudly exhibited in Paris until 1940 when German troops occupied Paris. Hitler ordered the carriage to be returned to the exact spot where Germany had been forced to surrender 22 years earlier. From here he negotiated the terms of the French surrender.  When Hitler realised Germany were going to lose the war he ordered the carriage be blown up, to prevent it becoming "a trophy of the Allies once more."

A Journey on the Venice Simplon-Orient-Express

The iconic Orient Express made its last journey in 1977. The train might have been destined to end up as simply a story of old world elegance, but a budding entrepreneur purchased some of the pre-war dining cars and carriages. He had them beautifully restored to their former glory and in 1982 the Venice Simplon-Orient-Express followed on the tracks of the iconic train.

Today you can experience the luxury of this iconic journey on the Venice Simplon-Orient-Express. Passengers can relax in style aboard the beautifully restored carriages, enjoy the utmost in travelling elegance and experience the magic of 'the King of Trains and the Train of Kings'.

The Venice Simplon-Orient-Express route takes passengers from Paris to Venice in the utmost luxury.