The history of Spain is rich and diverse, from Moorish domination of Spain in the 8th century to the conquistadors', one building has been a symbol of strength, power and royalty. The Alhambra sits on a plateau overlooking the city of Granada. When taking rail holidays, Europe offers many diverse cultures, sights and sounds, but nowhere encapsulates so much history in one place quite like this.

The Alhambra is a beautiful palace complex located in Granada, in the Andalucía region of Spain, dating back to the 9th century. The palace is a UNESCO World Heritage site and one of Spain's most significant tourist attractions. The country's history is beautifully reflected in the varied styles of architecture and design that reflect centuries of creativity. Originally constructed as a small fortress in 889, the building was abandoned and fell into ruin until halfway through the 11th century. It was then that the Moorish emir Mohammed ben Al-Ahmar of the Emirate of Granada began rebuilding it. In 1333 the building was converted into a royal palace by the Sultan of Granada. 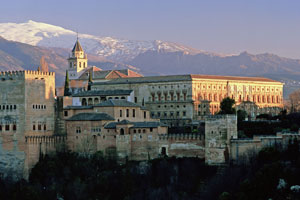 The Alhambra was called 'a pearl set in emeralds' by Moorish poets, a reflection on the building's whitewashed outer walls surrounded on all sides by trees. The grounds and gardens of the Alhambra are beautifully designed. The park, Alameda de la Alhambra, was planted by the Moors with roses, myrtle and orange trees. In spring wildflowers and grasses take over parts. The sound of running water is audible due to the many water features and the park is full of nightingales. Not one spot in the Alhambra complex is without a green courtyard and beautiful gardens full of flowers and fruit trees.

The literal translation of Alhambra in the original Arabic is 'the red (female)', a reflection of the clay from the surrounding area used in the original construction. The palace boasts wonderful examples of Islamic art and architecture from the final stages of the Moorish rule of Spain. Every addition to the palace was constructed to open up to a central courtyard. The palace reached its current size as every Muslim ruler added his own stamp to the building, although each followed the same theme of 'paradise on earth'.

There was no master plan for the building of the Alhambra. The layout is quite haphazard, although the original quadrangle design is mimicked in each new addition. The exterior of the building was left plain and austere, but inside is full of stunning colour. Fountains, columns and reflecting pools add to the beauty. Inside blue, yellow, red and golden tiles, although faded by time and weather, remain breath-taking. Isolated from the rest of the Muslim world, the Alhambra developed unique artistic traditions which can still be seen today.

The last Moorish rulers in Spain were the Nasrid dynasty, throughout this rule the building was constantly being enlarged and beautiful gardens were created in the grounds. The scale of the Alhambra complex is immense, covering roughly 1,000,000 m2, and during its heyday functioned as a city in its own right, completely separate from Granada below.

After the re-conquest of Granada by the Reyes Catolicos, 'Catholic Monarchs' in 1492, some portions of the building were used by Spain's new Christian rulers. Examples of Moorish art were in some places hidden, and in others imitated. After a time, the building was once again abandoned and allowed to fall into ruins. For centuries the grand, beautiful Alhambra was occupied only by squatters. Then, in the 19th century, Europe and America were inspired by stories from the Romantics. European scholars arrived and work was begun restoring the Alhambra to its former glory.

The Alhambra as muse

Many writers have been inspired by the palace, either by the history or the beauty. Some of these include Salman Rushdie, Philippa Gregory and Paulo Coelho's The Alchemist. The Alhambra has also influenced musicians from The Grateful Dead to legendary Spanish guitarist Andres Segovia. M.C. Esher visited the Alhambra in 1922 to study the symmetry of the Moorish tiles, and the 1921 film El Dorado features many scenes filmed here. The palace also appears in video games and has a main belt asteroid named after it.

The Alhambra is a living monument, reflecting centuries of Spanish history. The site can be reached during rail holidays to Spain via Granada. Why not visit the site and immerse yourself in the rich and varied history of one of Spain's most treasured sites?