Ideally situated in the heart of Southern France, between the Mediterranean and the Atlantic Ocean, the cosmopolitan and enthusiastic city of Toulouse is a delight to discover. Toulouse is often known as Ville Rose - the "Pink City" - due to its red-brick buildings, which seem to subtly change colour throughout the day. Toulouse was once a city that inspired medieval poets; today it has become a pioneering centre of technology and aerospace development. Toulouse is now home to Aérospatiale, the national Space Centre, the European shuttle program, a selection of leading aeronautical schools, and a ground-breaking electronics industry. 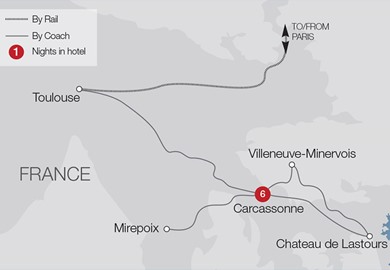 Carcassonne & Cathar Castles of France
Anonymous
“The tour was excellent, but although the time allowed for crossing Paris on the way back seemed adequate, it was rush hour and we missed the Eurostar we were booked on. For the sake of those who were not staying over night in London we accepted standard class on the next train, but of course this meant we had to pay for our (not too brilliant) food and drink. Also we were scattered all over the train, though at least some of us were able to sit with our partners, due to the kindness of strangers who were willing to swap. Gare du Nord was chaotic. They belatedly tried to give precedence to those on earlier trains, but by then it was too late. Our failure to cross Paris in good time was in spite of the authorities restricting traffic due to the immense heat. I know that one does not want to spend longer than necessary at Gare du Nord, but the stress caused by the shortage of time coupled with the fact that we missed the train was much worse.