A beautiful and captivating region of France

From timeless vineyards and sun-drenched hills, to imposing Cathar castles and historic abbeys, join us on a remarkable tour showcasing the very best of Languedoc. We explore the iconic walled Cité of Carcassonne, enjoy an excursion to the 'Ville Rose' city of Toulouse, and immerse ourselves in local market life.

We meet at our exclusive Departure Office at St Pancras International in London, where we board the Eurostar for Paris. We continue to Narbonne, where we take a coach to Carcassonne, checking into our hotel, the 5-Star DoubleTree by Hilton. 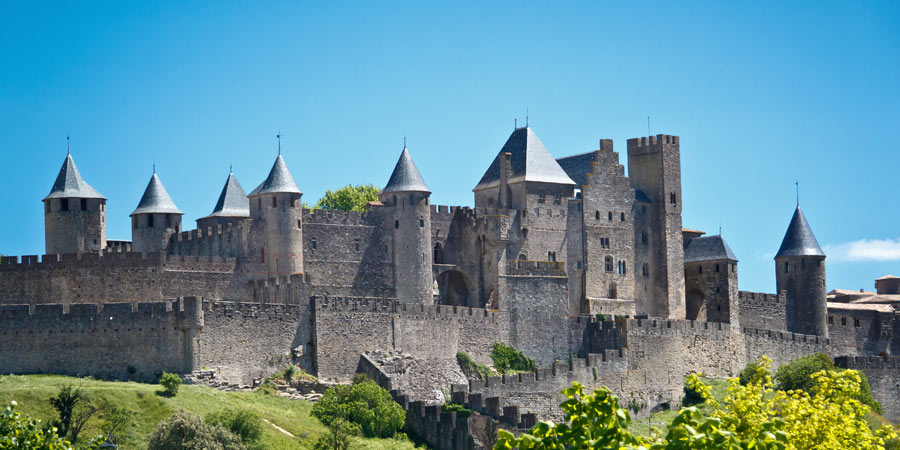 We explore the incredible Cité of Carcassone on a guided tour today. Carcassonne is renowned for its impenetrable city walls, which still encircle the citadel entirely. Defensive towers and drawbridges - all original features, have led to the city being awarded UNESCO World Heritage status. Accessed by an ancient bridge which crosses the former moat, the Cité is the archetypal icon of romantic medieval France.

Our tour today covers the key sights, attractions and monuments of the Cité and includes entrance to the impressive Château Comtal, an incredibly wellpreserved fortress which dominates the Cité. Dating back to the 12th century, inside is housed a fascinating museum dedicated to the siege of Carcassonne from religious crusaders. The rest of your day is at leisure. You can remain in the Cité and discover the network of cobbled lanes and sloping pathways adorning the citadel, or take in one of the museums or art galleries.

Across the water, Bastide St Louis, which despite its status as the 'New Town' was actually established in the fourteenth century and also boasts many hidden charms. This town is essentially where the people of Carcassonne live and represents an excellent opportunity to watch the pace of French life in this region, perhaps you'd like to settle down in a quaint café and indulge in a spot of people watching. Another option is the towering Basilica of St Nazaire, modelled after St Denis cathedral in Paris as a symbol of the Crown's victory over the south. The Basilica as we see it today was completed in 1330, although certain elements of the cathedral predate the fourteenth century. 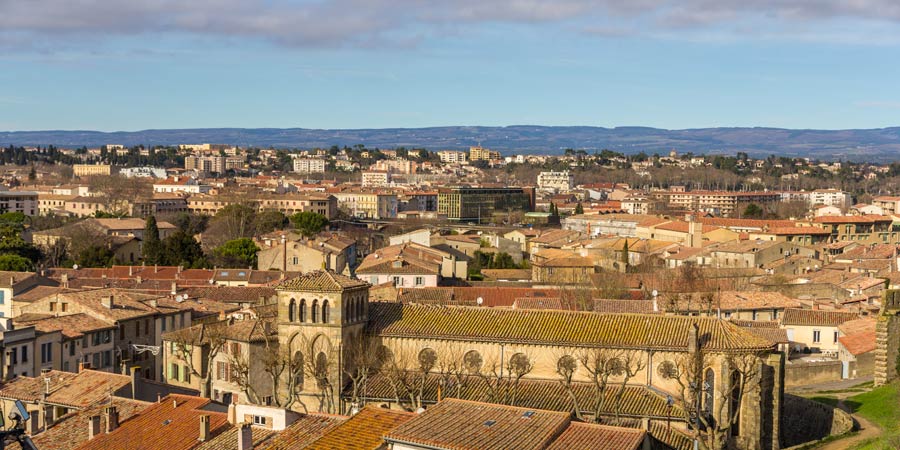 This morning we travel by coach to the handsome city of Toulouse. Known as the 'Ville Rose', or 'Pink City' due to its red-brick buildings, which seem to subtly change colour throughout the day. Toulouse was once a city that inspired medieval poets; today it has become a pioneering centre of technology and aerospace development. Toulouse is now home to Aérospatiale, the national Space Centre, the European shuttle programme, a selection of leading aeronautical schools, and a ground-breaking electronics industry. Despite its many faces however, Toulouse hangs on to a resolutely old-fashioned French soul, with its markets, regional cuisine and cafés interspersed between secondhand book stalls and antique shops, making it a pleasure to explore.

We do so on a guided walking tour of the medieval city, taking us along the winding, narrow streets of the elegant Old Town, seeing the Capitole (Town Hall) building in the vast, open Place du Capitole one of France's finest squares. We also see the Basilica St-Sernin, an 11th century church regarded as a Romanesque masterpiece, as well as the extraordinary architecture of the Jacobins Convent and the Renaissance Bernuy private mansion.

Your afternoon is free, and there are many options open to you. Perhaps you'd like to visit the excellent Musee de Augustins de Toulouse. This fine arts museum houses a collection of sculptures and paintings from the medieval period through to the early 20th century. The convent was eventually secularised in 1793 and subsequently opened to the public in 1795, making it one of the oldest museums in France. Another suggestion would be the interesting Muséum de Toulouse, a museum of natural history that contains over 2.5 million items. Opened to the public in 1825 this museum was the first in the world to open a gallery of prehistory.

The museum is also home to the Henri Gaussen Botanical Garden, the garden spans 7 hectares containing thousands of different varieties of plants. Tonight, back in Carcassone, we enjoy a traditional cassoulet dinner. This celebrated dish is traditionally made with pork and duck then cooked with haricots beans.

Travelling by coach, our first visit today is one of Languedoc's most famous sites, the historic Châteaux de Lastours area. Set in the heart of the Cathar countryside, this is a region famous for its web of sun-drenched fields, vineyards, and rugged hills dotted with tranquil villages - crowned by a wealth of scattered Roman ruins, medieval castles and fortified strongholds. It is also home to a collection of 4 former Cathar fortresses, magnificent chateaux that seem impossibly perched atop, and built into, the surrounding hills. These were once a significant place of refuge for the Cathars during the religious crusades of the 13th-century. We then travel to Belvedere viewpoint where we have some time at leisure. We continue to Villeneuve-Minervois for a relaxed 4-course lunch, accompanied by local wine. 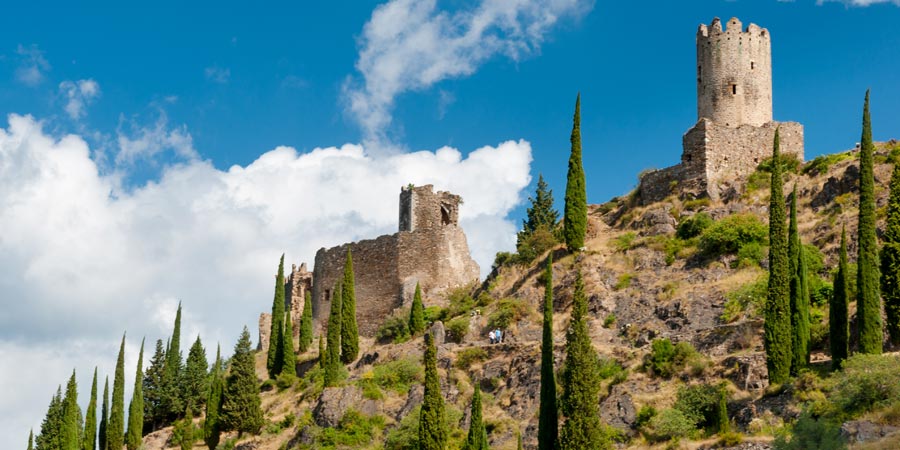 This morning we travel by coach to Mirepoix for the town's weekly market. Located in the Old Town's medieval square, here you can sample and purchase fresh, local produce as well as home-made crafts and wine.

On Day 6 you are at leisure until our farewell meal tonight, which is taken at a restaurant in the grounds of Château de Pennautier. The delicious menu is accompanied by wines produced in the castle's own vineyards. 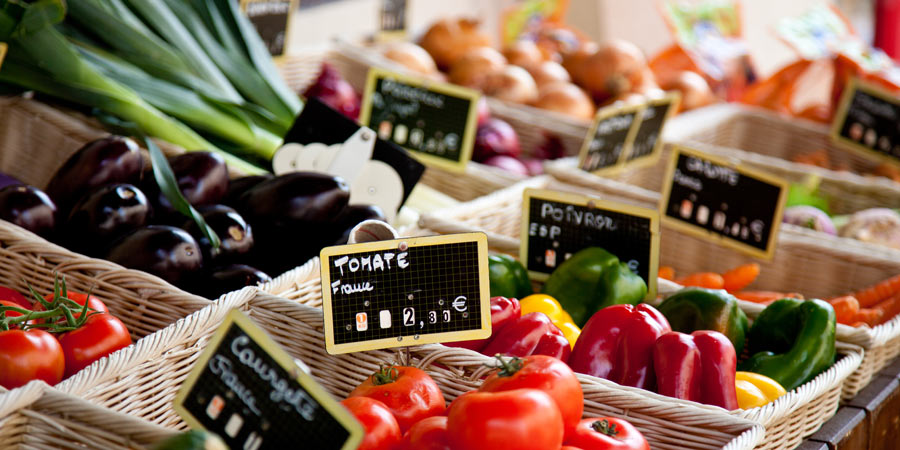 Checking out after breakfast this morning, we transfer to the station for the train to Narbonne. Here we change for the high-speed service to Paris, boarding the Eurostar service for our return journey back to London.

88% of travellers would recommend this tour

Based on 42 verified reviews

The holiday was excellent, but although the time allowed for crossing Paris on the way back seemed adequate, it was rush hour and we missed the Eurostar we were booked on. For the sake of those who were not staying over night in London we accepted standard class on the next train, but of course this meant we had to pay for our (not too brilliant) food and drink. Also we were scattered all over the train, though at least some of us were able to sit with our partners, due to the kindness of strangers who were willing to swap. Gare du Nord was chaotic. They belatedly tried to give precedence to those on earlier trains, but by then it was too late. Our failure to cross Paris in good time was in spite of the authorities restricting traffic due to the immense heat. I know that one does not want to spend longer than necessary at Gare du Nord, but the stress caused by the shortage of time coupled with the fact that we missed the train was much worse.

The tour manager was very good particularly when we encounted major problems at the Gare du Nord on the return journey. The trip down the Canal du Midi was boring but all the other organised trips were good. The hotel at Carcassonne was of a good standard

Everything from the weather, hotel, location and travel was 5 star from start to finish.

I had an excellent experience.