With its myriad of cultural offerings, historical monuments and famed entertainment scene, Dublin is truly one of Europe's finest cities, brimming with things to see and do. Dublin originally grew around the ford over the River Liffey. After being raided by the Vikings, the city changed hands in the Norman Invasion of 1169. This period saw the construction of the cultural behemoths of Dublin Castle and St Patrick's Cathedral, and ushered in almost 800 years of English rule. By the early 18th century the city was in a poor state of repair, and the Protestant Ascendancy set about creating a modern, Anglo-Irish metropolis.

The result was largely successful; for a time Dublin was the second-largest city in the British Empire, and the grand townhouses set around charming landscaped squares and spread of attractive cobbled streets can still be found today. From the Act of Union in 1801 until about the 1960s Dublin faced its most difficult period, with civil unrest and stages of poverty. Yet it has come through these turbulent times to become a magnificent attraction, a vibrant, modern capital, and now a truly world-class city. 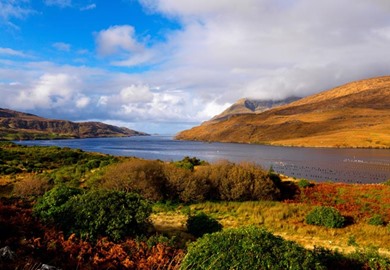 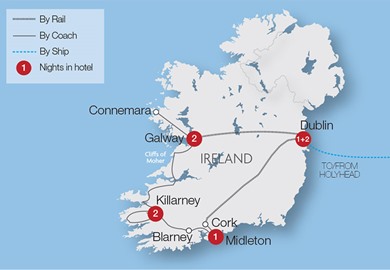 Map and accommodation
Our customers love our Dublin tours
Powered by

The Enchanting Emerald Isle
Mrs M Hemmelman
“The Enchanting Emerald Isle trip was very good. We enjoyed the places visited, but would like to have had more time in Dublin. The guided tours (Jameson, Kilmainham Gaol, Titanic Experience and Glen Keen Farm) were excellent, except for the guide picked up in Dublin--she was knowledgeable, but did nothing at the Book of Kells. The Royal Marine Hotel had excellent service, great rooms, and very accommodating personnel as did the Innisfallen. The Oriel left a lot to be desired. The Ardilaun was okay. The bus driver, Dan, was excellent!!! I understand the amount of people for the trip was doubled at the last minute, which wasn't fair for us or the tour manager. Excellent help in setting up the trip and answering our questions from Great Rail Journeys. Thank you.

Housed in a complex of Dublin's most impressive buildings, Trinity College Library is Ireland's largest, and contains a copy of all material published in the country. Beautifully appointed throughout, the library is home to the world-famous Book of Kells, the wonderfully illustrated gospels of the New Testament, created by monks in the 9th century.

Founded in 1191, this magnificent structure is the National Cathedral of Ireland. The imposing grey-stoned building hosts a number of public national ceremonies, and is the final resting place of celebrated author Jonathan Swift.