Wellington's wonderful waterfront location on the Cook Strait (the narrow waterway separating the two islands) is perhaps its most beautiful feature. The city's top tourist attraction, the Museum of New Zealand (Te Papa Tongarewa) is located here. The land rises sharply up a steep hill from the waterfront, with many expensive properties built on the slopes. The city's residential buildings, due to threat of earthquakes, are primarily constructed from wood. "Government Buildings", located close to Parliament, is the largest wooden-constructed office building in the Southern Hemisphere. 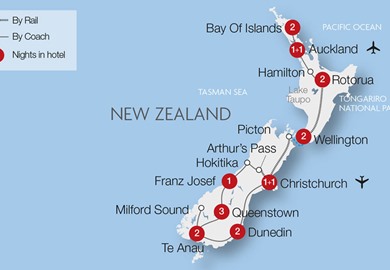 Map and accommodation
Our customers love our Wellington tours
Powered by

Grand Tour of New Zealand
Mr B McLean
“Tour Manager very good.Hotels up to standard except the on at Bay of Islands where I have stayed in better Butlins Holiday camps.

A journey on Wellington's cable car (running from Lambton Quay) takes you up above the city and allows for spectacular views over Wellington Harbour. At the summit you will find the Cable Car Museum, as well as the entrance to Wellington Botanical Gardens. A pleasant downhill walk through the gardens takes you back into the centre of Wellington (if you intend to walk the gardens, you only need to purchase a single fare on the cable car).