As South Africa's Cape Peninsula stretches south-west into the South Atlantic Ocean, the rugged terrain narrows until it terminates at the rocky headland known as the Cape of Good Hope.

Cape Point, the most south-westerly tip of the Cape of Good Hope forms part of a designated nature reserve located within the larger Table Mountain National Park and is renowned for the breath-taking beauty of its landscape and of the diverse and abundant wild flowers and plants that grow here.

Due to its treacherous weather and rocky waters this region was originally named the 'Cape of Storms' in 1488 by its Portuguese discoverer, Bartolomeu Dias, but was later renamed 'the Cape of Good Hope' by King John II of Portugal. In 1859 the Cape received its first lighthouse. Standing almost 250 meters above sea level, today it can climbed to on foot or via the gently ascending Cape Point Funicular Railway. The lighthouse's more recent successor, installed in 1914, remains the most powerful lighthouse in operation on the South African coast.

It is the natural wonders of the area, however, that are the highlights of any tour of the Cape of Good Hope and Cape Point. Part of a UNESCO World Heritage site known as the Cape Floral Region, Cape Point hosts 1,100 different plant and flower species, more than 250 bird species and a diversity of wild animals including zebra, eland, baboons and various reptiles. 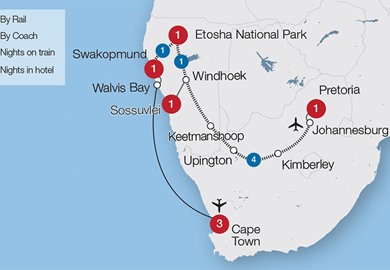 The Cape of Good Hope is notorious for shipwrecks, and starting at Olifanstbos in the Cape Point Nature Reserve are three well-signposted walking trails (two easy, one moderate) that take visitors along the beach to the sites (and remains) of some of the vessels that succumbed to the rocky shores here.

Several scenic walks can be taken around Cape Point allowing visitors to enjoy the magnificent coastal scenery, discover historic artefacts such as an old signalling cannon and a lime kiln, take the opportunity to spot the Cape's abundant wildlife and explore the rock pools and secluded beaches beneath the cliffs.

The spectacularly-located Two Oceans restaurant opened at Cape Point in 1995 to provide an unforgettable al fresco dining experience. If time is an issue there is an efficient snack bar for takeaway food including sandwiches and pizzas adjacent to the restaurant. The Cape Point Nature Reserve also features three shops specialising in souvenirs, natural products, clothing and locally produced ceramics and handicrafts.