The island of Capri is located in the south end of the Gulf of Naples, just off the coast of the Sorrentine Peninsula. It is one of the most beautiful, idyllic islands in the Mediterranean and has attracted artists and writers for centuries. The island, which used to be off-limits to almost all but the very rich, has a striking beauty that can be seen as you approach the island by ferry. The hillsides climb steeply from the azure waters and beautiful whitewashed houses cling to the steep slopes.

Caves and the coast
La Grotta Azurra (the Blue Grotto) is one of Capri's most beautiful sights. The 197-feet (60-metre) long cave has a narrow, low entrance, which causes sunlight to enter the cave at such an angle that it creates a unique effect. The cave lights up a magical, mystical blue color, which led local fishermen to believe it was haunted. Capri offers a range of delightful walks of varying length. One of the most popular is a 40-minute stroll from Capri Town, the island's largest settlement, to Villa Jovis, which occupies a dramatic location perched on the edge of a rock face at the easternmost point of the Capri. The views across the coastline and over the water towards the mainland are simply stunning. 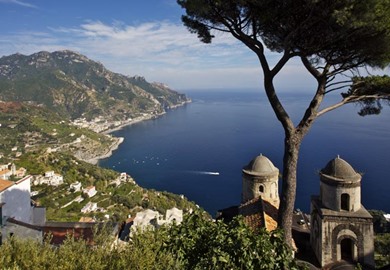 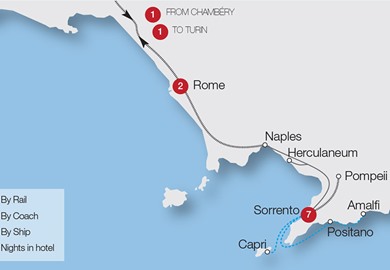 Map and accommodation
Our customers love our Capri tours
Powered by

Experience The Prosecco Wine Road during tours to Italy by train. Try some of the world’s best sparkling wine and take in the glorious scenery.

From Venice to Tuscany, Italy is a beautiful country full of delights. Experience its Roman splendour on a Great Rail Journeys escorted vacation.