The colorful Nice Carnival runs for the two weeks leading up to Mardi Gras - the last chance to indulge in feasting, drinking and merriment before the 40 days of lent. Unlike many similar carnival events across the world, the Nice Carnival is more of a spectator occasion, rather than a mass-participation carnival which takes over the city. Over 1,000 dancers, actors and performers take part, with processions through the streets and along the grand Promenade des Anglais.

Nice Carnival dates back to at least 1294, when celebrations preceding Ash Wednesday would see the oppressed masses donning masks and mocking the aristocracy - an offense throughout the rest of the year that could result in the perpetrator being beheaded. The Carnival presents elaborately decorated floats, usually following either the year's set theme or with mild (often mocking) political undertones. The floats follow a published path through the city streets; the path is different every year but always includes the Promenade des Anglais. In addition to the main floats are the 'Bataille de Fleurs', where floats adorned with meticulously arranged flowers parade through the streets. Young men and women on board these floats toss fresh flowers into the crowd. 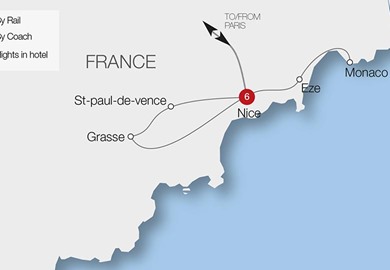