Stretching out from the north-eastern corner of Vietnam across the Gulf of Tonkin, Halong Bay is a magnificent area of outstanding natural beauty. Here about 3,000 islands of incredibly picturesque karst rock formations all rise dramatically from the emerald waters beneath. There are also tiny beaches lining many of the islands, and many boast caverns ranging from smaller grottoes to sizeable caves - making the place a haven for adventurers.

According to legend, the bay was formed when the gods sent a family of dragons to help protect the Vietnamese from invaders. These dragons then breathed out a number of jewels, which formed into today's islands and linked to form a defensive wall. Vietnam was saved from invasion, and the dragons descended to live under the sea. 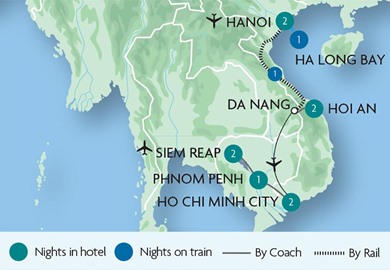 Whilst this story is considered to be entirely fictional, there is still a mythical aura surrounding Halong Bay today; the bay is home to dozens of species of rare wildlife, some of which are believed to exist only here. In recognition of its outstanding universal value, the bay was declared a UNESCO World Heritage site in 1994. Owing to Halong Bay's geological significance, its World Heritage status was altered in 2000 - making it one of the world's few sites that UNESCO has celebrated for multiple criteria.