Venice is known as the impossible city, built in the middle of a swampy lagoon next to the Adriatic Sea. The way of life in Venice has changed so little that even today, its most famous son, Marco Polo would still recognize its streets and waterways. Venice holidays by train are a wonderful way to take in the history and culture of this unique city, known as the Queen of the Adriatic.

In 400AD Italy was the target of invading barbarians, including Attila the Hun who brought the Roman Empire to its knees. To escape the constant fighting and invasions, Italians in Northern Italy fled into the swamp next to the Adriatic Sea. They were safe here because enemies could see no profit in following them into the swampy mud. At first they would simply wait it out, and return to the mainland when the invaders had left. The raids became more and more frequent, and eventually Northern Italy was colonized by a Germanic tribe known as the Lombards. Italians who refused to submit to their invaders begun to build permanent homes out in the lagoon, beginning with wooden huts that wouldn't sink into the swamp. The city of Venice was created out of a sense of fear and desperation, but Venetians were created out of determination.

The city in the lagoon had no fresh water and no land on which to grow crops, which forced the Venetians to become traders. The commodity they had readily available was also in high demand: salt. Known as 'edible gold', salt was one of the most valuable substances in the world due to its ability to preserve food. The Venetians used open salt pans to produce salt, which they traded for the wealth they needed to build their city. 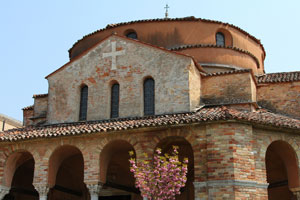 The Venetians wanted to use their new found wealth to build a city to rival the mainland, but the muddy islands in the lagoon were not solid enough to build on. To overcome this, thousands of wooden poles had to be driven through the sediment until they hit more solid ground below. Wood was perfect for this as it will last indefinitely under water, eventually petrifying to become as solid as stone. The weight of the buildings was spread across the poles using wooden crossbeams, and a layer of water-resistant marble was laid on top. Torchello Cathedral was moved, brick by brick from mainland Italy and rebuilt in the lagoon. The cathedral was rebuilt several times in its early life due to Venice's' subsidence, which can be seen today in the leaning bell towers of Venice.

As the Venetians grew wealthier they began building grander buildings. Venice became famous and, subsequently, somewhere worth invading. The first to try was Pepin in 810, but his army didn't have the sailing skills to fight in Venice's muddy lagoon. Malaria also severely affected the army and killed King Pepin. This attack inspired Venetians to fortify their city. They built their new capital, the Rialto in the middle of the lagoon which is now the heart of modern Venice. A mixture of the natural waterways and manmade canals were designed for trade purposes.

The people of Venice now wanted respect. According to legend, two Venetian merchants travelled to Alexandria, and bribed the guardians of a shrine for the body of St Mark. To get past Muslim officials they supposedly covered his body in pork, and sailed it back to Venice. Work was begun on St Mark's Basilica to house the body. The foundations for St Mark's Basilica had to be driven down fifteen feet to support the massive building. This sparked an age of building in Venice that still captivates the world today. The buildings needed more than a million wooden poles to support them, and stop them sinking into the water. Some buildings have lasted more than a thousand years. This method of building on wooden poles is still used today in Venice. Venetian merchants began building grand houses and palaces in the center of the canals, allowing easy access for their trade boats.

The Queen of the Adriatic 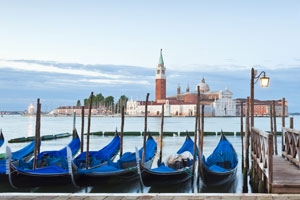 Venetians became skilled boat men out of necessity, horses were never allowed in Venice and even today cars are banned in the city. Everything goes by boat in Venice. Gondolas were specifically designed to navigate the narrow waterways of Venice. Taking advantage of their position in the water they built a huge ocean going trade fleet to sell their salt and import luxuries from the east. In the 1300s nearly 3000 ships were sailing under the Venetian flag. They were so successful that Venetian coins have been found all over the world. The city of Venice was literally married to the sea. Every year the Venetian ruler, the Doge, would throw a gold ring into the sea and proclaim, 'We wed thee oh sea, in token of our true and lasting dominion'.

One of the most famous Venetian merchants was Marco Polo. He travelled all the way to China, and, according to legend, brought a new style of cooking to Italy - pasta.

Venetian ships were not only made for trade, they were also built for war. They were ready to fight for and defend its trade routes, and open up new ones. Their skill in fighting at sea was in demand. In 1202 the Christian crusaders 'rented' the Venetian fleet to assist in capturing Jerusalem from the Muslims. However, the Venetians saw a chance for greater reward and sailed to Constantinople, the richest city in the known world. The Venetians helped to loot the city, and stole great quantities of gold, marble, holy relics and art. 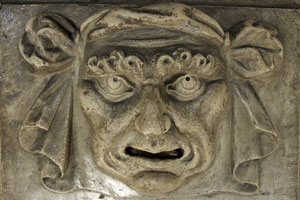 The Venetians, huddled together in the middle of a lagoon, developed a strong sense of community and pride. Every trade ship was ordered to bring back riches that would help to increase the splendor of St Marks Basilica, and Venice developed its own brand of democracy. A council of two-thousand members, both rich and poor would elect the city's leader, the Doge. There was great care taken to make sure no one person or family ever became too powerful. This system was highly defended by the Venetians and an anonymous box, called the Lions Mouth, was set up where citizens could leave tips detailing suspected plots by their neighbors. Anyone found guilty was subject to torture and imprisonment.

Venice was a city ahead of its time with regards to welfare, the city's wealth was used to provide doctors, give the poor free legal representation and support artists.

Venice's domination of sea trade ended when Christopher Columbus discovered the Americas and opened a new trade route for Europe. Then the Portuguese found a new way to Asia and Venice was no longer the main port of call in sea trade.

By the 1600s Venice's power had faded, and the Venetians were instead becoming famous for their decadence. The great wealth Venice had accumulated was now being spent on lavish masked balls and carnal pleasures. It became famous as the pleasure capital of Europe. Gambling became a city wide craze and Thomas Coryat, an English writer claimed there were 20,000 courtesans in Venice. The Venetian reputation was made even more outrageous by the Venetian, Casanova.

In 1797 Napoleon's French army marched into the city unopposed, and the city became a colony after 1000 years of being a proud republic. It remained in foreign hands until it became part of a united Italy in the 1800s.

La Serenissima ‘the most serenely beautiful’ 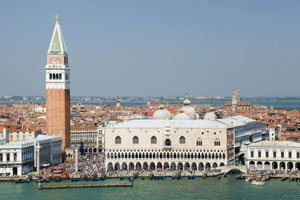 For one thousand five hundred years, Venice has stood firm against the tides, until 1966 when a huge tide hit Venice and left the city 6 feet below sea level. The salt water soaked into the bricks and begun eroding the buildings. This is still taking place today. Venice not only has to compete with rising sea levels, the foundations of the city are slowly sinking deeper into the lagoon. It is estimated that for every century that passes, Venice sinks four to five inches further into the water.

Venice today is still one of the most beautiful cities in the world - the whole city is listed as a World Heritage Site along with the lagoon surrounding it. Travellers can fully experience the luxury of the city by arriving on the Venice Simplon-Orient-Express.

Discover the beauty and serenity of Venice on one of our escorted tours to Italy. Arrive in the city of Venice on the Venice Simplon-Orient-Express, and get lost in the ancient streets at your leisure.

Train package holidays in Ecuador are spectacular. Visit ancient Incan settlements, travel through lush rainforest and take a ride on The Devil’s Nose.