Ecuador is a country steeped in over 8000 years' worth of history. The country is literally at the center of the world, as it sits exactly on the border separating the northern and southern hemispheres. Named after the Equator which passes through the country, tourism plays a big part in the country's economy. Holidays on trains venture through Ecuador's stunning landscape of mountains, volcanos and ancient Incan settlements.

The most difficult railway in the world 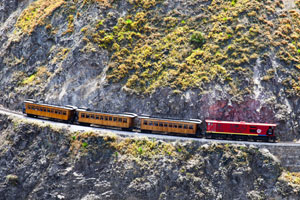 Ecuador's first railway opened in 1908 after twenty-five years of failed attempts and frustrated plans. When the railway first opened the tracks ran from the coastal city of Guayaquil to the country's capital, Quito.

The most difficult stretch of track to build was the near-vertical wall of rock known as El Nariz del Diablo (The Devil's Nose). Facing a 130km wall of rock, engineers devised an ingenious and nail-biting switchback system to scale the summit. This involved carving a series of tight zig-zags out of the rock, allowing the train to climb the side of the mountain by going forwards then climbing backwards up the next section of the tracks. The Devil's Nose Train climbs 800m at a gradient of 1-in-18, one of the steepest rail climbs in the world. An amazing, but challenging endeavor that led to the nickname 'the most difficult railway in the world'.

The railway became the life blood of the country, transporting cacao and helping to boost Ecuador's economy. In recent years the railways fell into disrepair caused by a mix of neglect and severe landslides caused by El Niño in the 1990s. Ecuador's railways have recently undergone a multimillion dollar rejuvenation, during this time The Devil's Nose was one of the only sections kept open due to its popularity with tourists. Travellers on The Devil's Nose Train once perched precariously on the roofs of the old carriages, and for $1 could rent a cushion to sit on during the ride. The dilapidated state of the tracks often led to derailments. It was not uncommon for a five hour journey to take more than twelve hours, due to continual stops to hoist the train back onto the rails using only stones and tree branches.

The devil’s in the detail 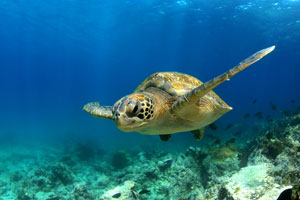 Today the line has been modernized and is more suited to cater for the demands of tourists and travellers alike. Train package holidays in Ecuador are becoming increasingly popular, in part due to the huge rejuvenation the railways have undergone. Ecuador's famous Galapagos Islands have been popular with tourists since Darwin's time, and a holiday by train through Ecuador can be completed with a visit to these beautiful islands.

The journey today is spectacular, with the railways repaired and beautifully restored 20th century steam trains running along key points of the route. The train carriages are wonderfully luxurious, and rival some of the world's more well-known luxury trains. Featuring lounge cars, dining cars and open carriages for passengers to truly appreciate the landscape. Ecuador has certainly earned its place on the list of great train holidays.

See the center of the world for yourself, visit Ecuador on one of our great train holidays.

Visit the Queen of the Adriatic on the Venice Simplon-Orient-Express. The city stretches back over thousands of years of trade, war and decadence.