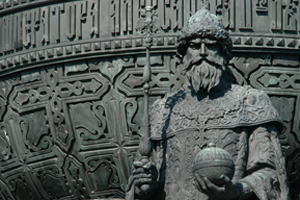 Moscow was officially founded in 1147, and began as a small log fort on the Moskva River. The rise and growth of the city started in the 14th century, when rulers of Moscow ingratiated themselves with the invading Tartars. Using cunning politics they obtained the right to collect taxes from other Russian principalities. With the protection of the Tatars Moscow grew larger, swallowing up much of its neighboring states. The Muscovite's were still required to pay protection to the invading Tartars, but in 1466 Ivan III came to power. Ivan was determined to end the rule of the Tartars, and taking the title, 'Grand Prince of all Imperial Russia,' he began to plot the deposition of the Tartars.

Ivan III married into the Byzantine Empire, and began a grand engineering project designed to announce to the world Russia was a force to be reckoned with. He brought skilled architects from Italy to begin work on the famous Cathedral of the Assumption, also known as the Dormition Cathedral. This was Ivan's first symbol of power, and it sent out a message to the Tatars. The Tatars raised an army and charged Moscow, Ivan sent his own army to intercept them. After months of fighting Moscow successfully vanquished the oppressors who had controlled Russia for almost three centuries. After this victory Ivan III became known as 'Ivan the Great', whose legacy was creating an independent Russia and tripling the Russian territory.

The Tatars were not completely vanquished, their capital city, Kazan still lay in the path of Russia's expansion east. It would be the grandson of Ivan the Great who would finally rid Russia of the Tatars and create an empire. Ivan IV came to power, in 1547 after a troubled childhood, he was convinced that he was personally appointed by god. Ivan IV was the first Russian ruler to call himself a Tsar. After a dramatic siege on the Tartar capital, Ivan IV captured Kazan, which opened the pathway for Russia's expansion into an empire. To commemorate his achievement he commissioned the building which is still today one of the most recognizable symbols of the Russian Empire, St Basils Cathedral.

By 1553 Ivan IV was at the height of his power, but was becoming increasingly paranoid. He began to strike out at anyone he felt opposed his power, including members of his family. In a paranoid rage Ivan IV had beaten his pregnant daughter in law so severely she miscarried. When his son confronted him Ivan IV, in a blind rage murdered his son and thus destroyed his own line of succession. Following this murder, along with his appetite for torture and cruelty, Ivan IV would become known as 'Ivan the Terrible'. By the time of Ivan IV's death, in 1584 the Russian Empire was deeply troubled and was starting to recede. The ten years that followed are known as the 'time of troubles'.

The Venice of the North 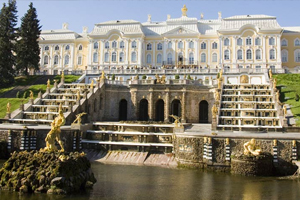 In 1696, out of this disastrous age for Russia, Peter I, after a time ruling with his siblings, became Tsar. At six and a half feet tall he was considered, both physically and metaphorically, a giant of Russia. He was aware of Russia's outdated thinking compared to Europe and was determined to change it. He visited Europe incognito, and saw trade opportunities for Russia in Europe. He saw his country's future as a seafaring state, and began drawing up plans to create a Russian Navy.

Peter I crafted plans for a brand new naval city that would put Russia on Europe's map. The land he had chosen for his new city belonged to Sweden, so he took it by force. He named this new city, St. Petersburg. Peter I planned for his new city to become the window on Europe, where modern, western ideas would begin and flood through the rest of the Russian Empire. St Petersburg's planned location, although being the perfect trade route into Europe, was also on the banks of the River Neva and surrounded by swamp. For five months every year the river would freeze, then thaw and flood the surrounding area.

The swamp made it difficult to get building supplies, so the foundations of St Petersburg were built up literally, by hand. The swamp also lacked solid enough ground for the buildings foundations, so hundreds of thousands of wooden poles had to be driven into the ground to create a solid base for the foundations. In 1706 Peter I launched his first war ship from St Petersburg. In 1712 the Tsar made the biggest change to the empire he would ever make, he declared St Petersburg Russia's capital city.

Peter I was so determined to bring Russia into the modern world, that in 1698 he issued a 'beard tax'. This was to be paid by anyone who refused to cut off their old-fashioned beards and adopt a more modern, clean shaven look. 'Peter the Great' had defeated Sweden, extended Russia's borders from the Baltic to the Pacific, built a new European capital, created Russia's navy and had dramatically increased Russian trade. The only thing missing from his empire was a grand palace, which he began plans for in 1714. Surrounded by lavish gardens and gilded fountains, Peter the Great called his palace, Peterhof. The palace was so spectacular it was dubbed, 'Russia's Versailles'. Peter the Great had succeeded in modernizing his country, he had taken Russia from a traditional, medieval country to an undisputed empire. 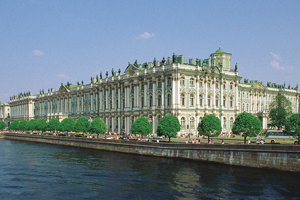 However, it was the wife of Peter's grandson who transformed St Petersburg into the city we recognise today. Catherine the Great came to power in 1762, by overthrowing her husband after he had ruled for just six months. Catherine picked up exactly where Peter the Great left off. She grew the Russian Empire by 200,000 square miles, to its greatest size to date. She was one of the first Russian rulers to help the poor, and was also the first leader to initiate a large scale inoculation program when in 1768 she immunized herself and her subjects against smallpox. Catherine planned hospitals, sanitation, schools and services. But Catherine's most grandiose project was the renovation of Russia's Winter Palace. She transformed St Petersburg into an ostentatious display of the power and culture of the Russian Empire. By the end of her reign in 1796 Russia was a superpower.

By the beginning of the 19th century, the Russian Empire covered one sixth of the world's land mass, stretching from the Baltic Sea in the west, all the way to Alaska in the east.

However, Russia's involvement in the First World War left the people of Russia starving. This led to the Russian Revolution, the rule of Russia's Tsars and Tsarinas was over. Vladimir Lenin took control, ushering in the Soviet Era. Lenin feared foreign invasion, and on March 5th 1918 he moved the capital from St Petersburg back to Moscow.

Russia is a country rich in history, it is at once beautiful and complicated and should be seen in its imperial grandeur. A rail holiday in Russia will take you between the countries two great cities, and is certainly one of the world's great train holidays.

Book your Russian holiday by rail with Great rail Journeys and see the stunning sights of the 'Motherland' for yourself.

Venice, the impossible city, has spawned countless tales of love and romance. Find your love story on holidays to Venice by train.