We are celebrating the wonderful colours of India. More than any other country, India can trace its culture, traditions and history through the beautiful colours used in everyday life. Our India in Colour infographic showcases these stunning colours, and tells the story of how colour unites the nation. A tour of India by train will immerse you in the colours of the country, and help you understand the significance of colour. In this post we will look at the significance of the colour yellow.

In ancient Indian tradition, the colour yellow is used to symbolise the balance of life. It is the centring colour between red and blue, and is the enduring colour of spring. Yellow is believed to have a healing power as it is the colour of the sun. 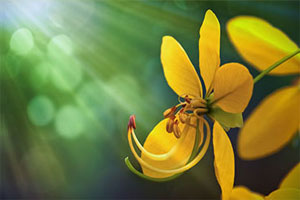 The Hindu festival of Basant Panchami celebrates the coming of spring, it is celebrated in India between January and February. The festival is predominantly celebrated in northern India. There are a myriad of traditions and stories surrounding the festival from every religion in India. The Hindu goddess of the Basant Panchami is Sarasvati. She is the goddess of wisdom, and embodies the different facets of learning, arts, the sciences, craft and skills. She is depicted as a calm and collected presence, and is often pictured sitting on a lotus. Sarasvati has four hands symbolising ego, alertness, intellect and the mind. Basant Panchami is celebrated by Hindus as Sarasvati's birthday.

A traditional Muslim story tells of the famous Sufi saint, Nizamuddin Auliya, who lost his nephew and was consumed by grief. He stopped meeting his followers, and the people didn't know what they could do to bring him out of his mourning. One day, his greatest disciple passed by a village where the local girls were dressed in yellow, holding sprigs of mustard flowers and singing to celebrate Basant Panchami. He asked the girls to give him a set of yellow clothes, wearing these and carrying a mustard plant, he set off to meet Nizamuddin Auliya. When the Sufi saint saw him, he began to smile and came out of his grief. An important part of the festival derives from this story and is the reason people dress in yellow and carry clay pots containing mustard flowers today.

The colour yellow holds special meaning during Basant Panchami as it signifies the vibrancy of life and the balance of nature. The colour yellow is seen in abundance during the festival. People wear bright yellow to participate in the festival, and offer bright yellow flowers to each other and to the gods and goddesses. Kasar Halva, a pastry coloured with saffron to turn it a vibrant yellow is eaten. During the festival India's crop fields are a beautiful sea of yellow as the yellow mustard flowers come into bloom. 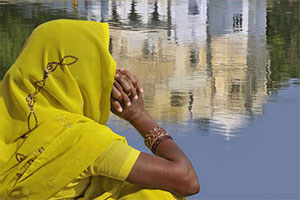 In Hindi cinema, the colour has become synonymous with romance. The beginning of a romance is usually depicted by yellow and famous Indian directors depict romantic scenes in mustard flower fields. These romantic connections are echoed in Hindi marriage ceremonies; the yellow spice turmeric is used during the haldi ceremony at weddings. Turmeric is mixed into a paste and applied to the bodies of the bride and groom. This signifies a ritual purification, and serves as a blessing of fortune and prosperity.

In Hinduism, yellow is also associated with knowledge and learning. It symbolises happiness, competence and peace. Buddhists hold saffron yellow to be the most sacred colour, it is the colour closest to daylight and symbolises renunciation of material possessions.

A feast of yellow 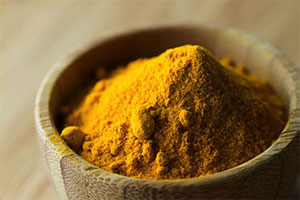 Turmeric in India was known as 'the golden spice' and 'the spice of life'. Spiritually, it is believed to balance the energies of the body. Turmeric is also revered for its medicinal qualities which include, anti-inflammatory, antiseptic, digestive, diuretic, antioxidant and antibacterial.

The fortress in Jaisalmer is one of the largest fortifications in the world. It is built out of local limestone, which shimmers yellow. The Jaisalmer Fort is located in the Thar Desert, and its natural yellow colour is well camouflaged by the surrounding desert. Yellow Jaisalmer Limestone is still popular for building and flooring today, thanks to the appealing yellow colour.

The saffron yellow at the top of the Indian flag represents the strength and courage of the Indian people. See how colour unites this beautiful country with our India in Colour Infographic.

From the burning yellow of the sun to the cooling effects of yellow turmeric, this golden colour brings to life the traditions of India. Experience it for yourself on Indian luxury train tours, with Great Rail Journeys.

All rail holidays in Scotland should include the Jacobite Steam Train. These days the train is most famous for its appearance as the Hogwarts Express.