When you book an idyllic cruise along the majestic Rhine River you will be rewarded with endless views of stunning scenery overlooked by elaborate cathedral spires. On cruises in Switzerland you will voyage along the River Rhine, which is one of the most significant and longest rivers in Europe and stretches from the Swiss Alps to the North Sea in the Netherlands.

As you cruise along the Rhine in Switzerland you will witness how unbelievably beautiful the surrounding landscape is. From Basel's impressive 16th century City Hall which is adorned with splendid murals to many of its UNESCO World Heritage Sites such as the bustling Old Town and Basel Münster, there is a wealth of attractions to admire.

On cruises in Switzerland your well-appointed ship also steers you through Amsterdam, France and Germany, with your journey concluding in Belgium. Glide gracefully along Amsterdam's meandering and brightly coloured waterways that run through thriving farmland to Cologne in Germany. Marvel at the exquisite Gothic architecture of the city's imposing cathedral or admire the pretty pastel painted buildings of the Old Town as your cruise in Switzerland continues.

The Majestic Rhine (Rail and Cruise) 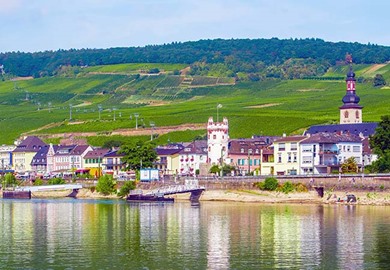 “Great ship, excellent service but some things went wrong and some things could have been improved.
Collected by Trustpilot

As well as experiencing the diverse cultures and historic sights of many different countries when enjoying cruises in Switzerland, you will also have the pleasure of staying on board a 5 star ship. The boat's plush interior coupled with a sociable and relaxing ambience, makes a cruise with Great Rail Journeys even more spectacular. Stylish cabins, mouth-watering meals and excellent facilities such as a fitness room and bar, create the perfect environment for cruises in Switzerland. Allow yourself to unwind in a world where time slows down and each destination charms you with its natural beauty. If you like to spend most of your time outdoors during your holiday why not soak up the rays on the Sun Deck or hire one of the ship's bicycles for a refreshing ride along the banks of the river?

Most of the shore excursions on cruises in Switzerland are included within the price of your holiday as well as accommodation, meals, rail travel and transfers. The added benefit of travelling with Great Rail Journeys is that you can enjoy the assistance of a professional Tour Manager. Browse cruises in Switzerland for comprehensive itineraries.