Venice lends itself to idle wandering, and possibly the best way to enjoy its captivating charms is to let yourself get lost in the myriad of winding alleys and twisting lanes that make up the city centre.

Basilica di San Marco
This unique landmark is renowned for its magnificent exterior and interior covered in spectacular encrusted mosaic marble carvings. St Mark's Basilica dominates the Piazza and is a symbol of Venetian glory. Embellished and enriched over the centuries from the East, it is a huge, complex and mysterious edifice - as much a museum as a church. For those who prefer a bird's-eye view, take the opportunity to climb the Campanile di San Marco, which offers incredible vistas over the buildings clustered around the centre, and shimmering lagoons further out.

St Mark's Square
Wander through the bustling square and soak up the atmosphere and entertainment; Piazza San Marco has undoubtedly been the heart and soul of the city for centuries with its blend of intriguing architecture.

Gondola tours
One of the highlights of any escorted Italy tour to Venice is a ride along the canals on board one of the city's famous gondolas. However, gondola rides can be expensive, and it is essential that you negotiate the price. The 'official' fare for a gondola ride is €80 for a 40 minute tour. However, gondoliers will always try to charge considerably more, usually for less time. For the best price, avoid gondolas waiting in the busiest areas of Venice, such as St Mark's Square. Also worth noting is that, while many consider a gondola ride to be about romance, the gondoliers will actually perform the role of a tour guide, pointing out famous houses along the way. Up to six people are permitted in a gondola for the standard fare (or whatever you have negotiated), making it a considerably cheaper option.

Doge's Palace
Doge's Palace overlooks St Mark's Square and the Venice Lagoon and is the former residence of the Doge of Venice - the supreme authority for the once hugely powerful Republic of Venice. The palace was constructed over the course of more than a century, from 1309 to 1424, and was used to house the main political institutions for the Republic, as well as being the residence of the leader. Today the palace is preserved as a museum.

Bridge of Sighs
Connecting the old prisons with the interrogation rooms in the Doge's Palace, the Bridge of Sighs is a raised, enclosed bridge which was often the last sight for convicts prior to their imprisonment. The name 'Bridge of Sighs' was coined by Lord Byron, describing the reaction of prisoners on seeing beautiful Venice for the final time.

Dining in Venice
Venice presents an enticing selection of dining options, with most restaurants offering a mouth-watering array of Mediterranean dishes and seafood. The Venetians even have their own version of tapas called Cicchetti - delicious snacks which they wash down with a glass of wine.

Murano
Famous for glassmaking, Murano is an island (actually a series of connected islands) in the Venice Lagoon. The island has produced highly regarded glass, particularly lampwork, since the foundries were moved from Venice in 1291 - Venetian authorities feared the risk of fire, as most of the buildings were wooden constructions. The 'Museo Vetraio' is Murano's glass museum, which is certainly worth a visit (closed on Wednesdays).

Burano
The island of Burano is famous for both the brightly painted fishermen's houses and for lace-making. The island is hugely popular with photographers, thanks to its picturesque, colourful buildings. The island has a lace-making museum (Museo del Merletto) and it is certainly worth enjoying a relaxed stroll to find the perfect photo opportunity; the streets in Burano are as narrow and winding as they are in Venice. 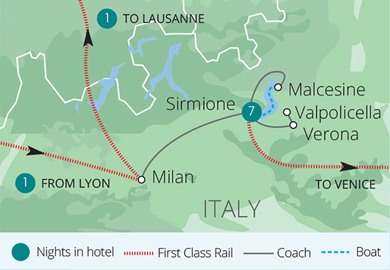 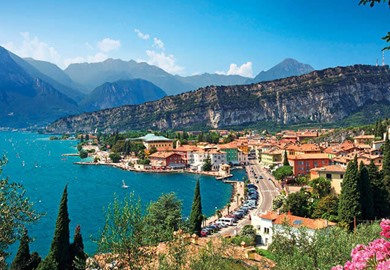 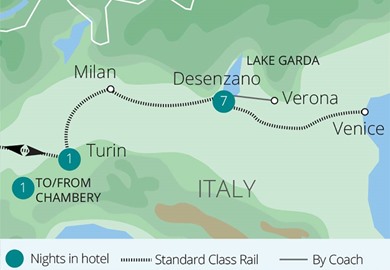 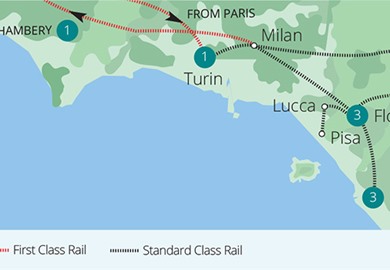 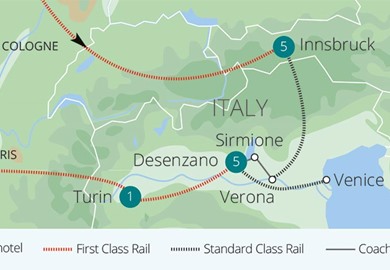 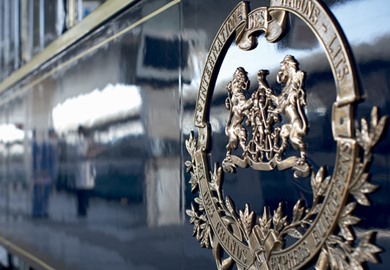 “We had a great time travelling from top to toe in Italy. The holiday was fast paced but each destination was worth the visit. We had excellent tour guides, excellent hotels in good locations and a superb tour manager who was well organised and well informed.
Collected by Trustpilot
Simply Lake Garda
David Firmin

“A very enjoyable trip helped by very fine weather and good company. We have several friends who have expressed strong interest and are quite likely to participate in future.
Collected by Trustpilot
Sirmione on Lake Garda
Alan Smith

Back to nature: 5 authentic experiences in scenic Europe

Discover a way of travelling that puts nature centre stage, as you discover Europe’s spectacular lake and mountain scenery in the best possible way - by rail.