Uzbekistan lies at the crossroads of the ancient trade routes between Mongolia, Russia, China and Persia, linking Eastern and Western Civilisations. Our Uzbekistan rail holidays are for anyone with a passion for history, archaeology and architecture, as this Central Asian country is filled with mesmerising buildings and ancient artefacts. As a result of its prominent location, the ancient cities became extremely wealthy. On rail tours in Uzbekistan you will see evidence of this wealth reflected in the myriad of impressive mosques and minarets, their intricate Islamic tile work and turquoise domes gleaming in the sunshine. You will also catch glimpses of ancient fortresses, grand palaces and dazzling bazaars. Having enjoyed independence since 1991, Uzbekistan is a wonderful contrast of desert land, fertile valleys and mountain ranges, and its people are good spirited and genuinely hospitable. Visit this arresting country on our Uzbekistan rail holidays.

You can experience the endearing country of Uzbekistan on an epic rail journey on the Golden Eagle Trans-Siberian Express which travels between Moscow and Beijing on our Silk Road tours. During your time on Uzbekistan rail holidays, you will get the chance to visit some of its most iconic cities. Bukhara is a UNESCO World Heritage Site and quite rightly so, as its fabulous buildings span a thousand years of history. The Ark is Bukhara's oldest structure and was once the residence of the Emirs who ruled in Soviet times. Now you will see the summer residence of Bukhara Emir located on the outskirts of the city at the beautiful Palace of Moon and Stars, with Oriental and European influences reflected in its architecture. You might also travel to Samarkand on Silk Road tours, a city that is littered with domes and minarets. Ancient monuments and colourful bazaars combine with contemporary buildings, parks and avenues, causing an exciting collision of history and modernity. Tashkent is the capital and was largely rebuilt following a devastating earthquake in 1966. You can see all of its wonderful highlights on a guided sightseeing tour when you enjoy Uzbekistan rail holidays. 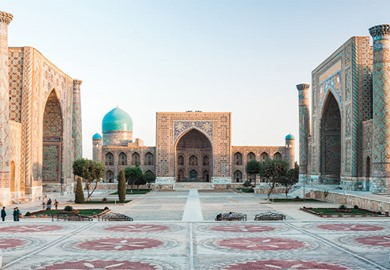 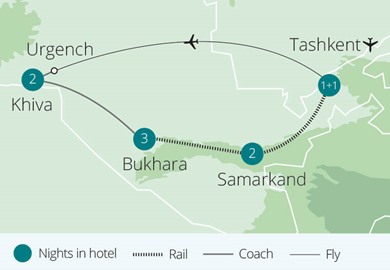