Delve a little closer into Kenya's inspiring landscapes and you will discover some of the most remarkable game viewing spots on the globe; stunning, well-protected national reserves that are home to some of the world's most beautiful endangered creatures - the fabled 'big five'. In Nairobi, Kenya's vibrant capital, the cosmopolitan cityscape gives way to vast Nairobi National Park. Here, the world's most revered safari creatures stalk the wild plains against a backdrop of the sprawling metropolis.

Further south, in the national park of Maasai Mara, intrepid travellers and wildlife photographers alike are indulged with a world-class 'big five' safari experience. Here, visitors may catch an unforgettable glimpse of an elusive leopard strolling across the vast plains, elephants bathing in the shallow waters of a watering hole, and majestic lions seeking respite from the heat in the shade of a leafy acacia tree.

Of course, there is more to Kenya than incredible safari experiences; like much of Africa, this is a land of striking contrasts, where hundreds of years of time-honoured traditions and culture combine with rural villages and cosmopolitan cities that are constantly looking to the future.

Vibrant emerging cities, fascinating ancient traditions, a rich artistic heritage and some of the most incredible wildlife viewing in the world - Kenya is a destination quite like no other. 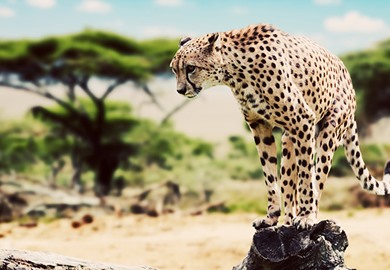 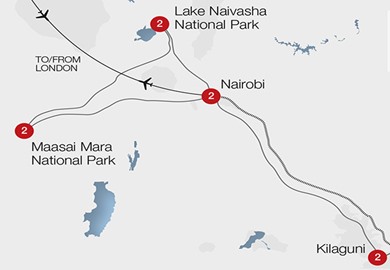 Kenya is located on the east coast of Africa, bordered by South Sudan, Ethiopia, Somalia, Tanzania, Uganda and, at its coastline, the sparkling Indian Ocean; a stretch of near-white sands fringed with palm trees and dotted with historic port towns. Venture inland and the landscapes become more diverse, with lush tea plantations, vast savannahs, sprawling lakes, deep forests and areas of arid desert. Wherever you venture in Kenya, panoramic natural beauty is in abundance at every turn.

Kenya is located close to the equator, resulting in a stable tropical climate that is consistently warm, with a notable lack of a distinct winter and summer. However, Kenya does have a wet and dry season. The dry season is generally from June to October, when visitors can expect clear skies and pleasant weather. Between November and May, in the wet season, there is much more humidity and periods of rainfall - though it rarely lasts all day. Weather is consistently warm throughout the year, with daytime temperatures averaging a high of 28°C. Despite this, it is recommended to layer up with warm clothing if you're embarking upon an early morning game drive, especially at higher altitudes (such as in Maasai Mara), as temperatures can feel substantially lower.

Kenya has a long and rich history. Evidence of some of the earliest forms of human life has been found here, including a six-million-year-old species of Homininae discovered in the year 2000, named Orrorin tugenensis ('original man'). Arab traders were visiting Kenya as early as the 8th century, bringing a unique Arabian influence which laid the foundations for the Swahili culture and language - an evolution of Bantu and Arabic. Development and trade around the coast were thriving, and the city of Mombasa grew to be an important trading port. In the late 1400s, the Portuguese invaded, taking dominance over the Arabs and beginning a 200-year-long power battle, the likes of which would not be seen until British colonialism in the 19th century.

Officially, Kenya was declared a British colony in 1920, though the British government had political influence in the country since the late 1800s when the East Africa Protectorate was formed. British rule lasted until December 1963 when Kenya achieved independence, though its lasting influence is evident throughout much of Kenya today.

Kenya boasts a melting-pot of diverse culture, informed by many years of varied influences from Arabian to Portuguese and British, as well as traditional tribal culture. The official languages are Swahili and English, though many more are spoken - namely tribal African languages. Christianity accounts for around half of the population, with Muslim, Hindu and Sikh minorities, and spirituality is an important part of day-to-day life.

The Maasai people inhabit much of northern, central and southern Kenya, as well as parts of Tanzania. Maasai villages can be found close to the country's popular game spotting areas, such as around the Maasai Mara, and as such the group are well known by tourists - often affording them a unique insight into a fascinating and unique culture. The lifestyle of the Maasai people is traditionally pastoral and revolves primarily around their cattle, their primary source of food, with whom their relationship is almost sacred. The Maasai are known for their vibrant red dress, beaded jewellery, stretched earlobes and traditional jumping dance, named adumu.

Like much of Kenya, the cuisine here is wonderfully varied, taking inspiration from local ingredients and spices. Dishes range from simple rice and ugali (a cornmeal porridge dish) to richly spiced meat stews and flavoursome Swahili barbeque, nyama choma - which translates as literally 'burned meat'. Generally, sweet and milky tea (chai) is the favoured hot drink throughout the country, despite the fact that Kenya exports some of the most well-regarded coffee in the world - although the popularity of coffee has seen a surge in recent years, especially amongst young people.