On a continent which prides itself upon the breadth of its cultural experiences, awe-inspiring landscapes and wildlife encounters, Africa's Republic of Botswana surpasses all expectations to deliver an adventure in escorted rail travel which, for once, genuinely justifies the description as a once-in-a-lifetime experience. 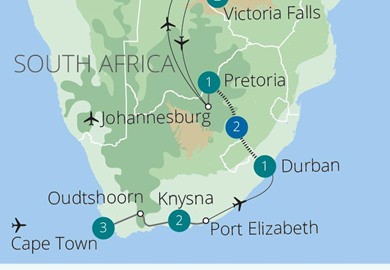 Botswana offers a travel experience unlike any other. A first-class safari destination, Botswana is paradise for wildlife enthusiasts: there are, for example, more African elephants here than in any other country on earth. An incredible diversity of natural habitats which encompasses everything from the arid Kalahari Desert to the lush Okavango Delta offers unparalleled opportunities to spot not only big game, but also rare mammals and countless species of colourful exotic birds.

Few experiences can compare with that of cruising at sunset along the Chobe River in Botswana's Chobe National Park, and sighting a group of hippopotamuses in the water, or a basking crocodile or two along the shore.

Botswana possesses its fair share of diverting, modern and culturally-rich towns and cities, but few visitors could disagree that it is the country's unspoilt natural treasures which provide the most compelling reason to visit. Travelling in comfort with Great Rail Journeys on an escorted tour in Botswana is, without doubt, the most pleasurable and memorable way to experience the large-scale natural spectacle on offer.

Botswana is a unique and unforgettable destination and at Great Rail Journeys we make every effort to ensure that our guests enjoy the most wonderful experience of their time here. Taking care of all travel and accommodation arrangements allows our customers to sit back and enjoy the journey through some of the Africa's most beautiful landscapes, whilst a full and varied programme of excursions and activities showcases Botswana at its best.

The land that is today known as Botswana is thought to have sustained flourishing farming communities since the seventh century. In the fourteenth century the land fell under the control of the powerful Tswana people who gradually migrated from the north of Africa to establish a new state which would prosper from agriculture, cattle herding and hunting. The rule of the Tswana people was undermined in the nineteenth century by the emergence of other settlers. These included the Boers, who fought with British colonists for control of Botswana. The local Tswana rulers allied with the British to defeat the Boers and Botswana became a British protectorate in 1890, remaining so until it gained independence in 1966.

Botswana is landlocked between Namibia, Zimbabwe and South Africa and experiences a subtropical desert climate which broadly results in two seasons. The wet season, summer, spans the months from November to April with January and February the wettest months. Torrential downpours can last from a single afternoon to several days.

In march and April, temperatures are hospitable and rain becomes increasingly sporadic. In the dry season - winter - which lasts from May to October, humidity is low and the chances of any rainfall are slight. In the hottest months of September and October daytime temperatures can reach 38C (100F), cooling only marginally at night whilst in May the temperatures are considerably more hospitable, attaining an average maximum of 28C (80F).

Botswana's agricultural heritage informs much of the nation's cuisine and food tends to be wholesome, tasty and based around fresh meats, cereals and vegetables. Sorghum wheat or maize are traditionally made into a porridge (bogobe) which accompanies dishes such as the popular seswaa - a heart stew of salted beef and onions. Other specialities include serobe, a hot dish of finely chopped animal intestines, offal and fat; Vetkoek, a ball of deep-fried dough which is cut in half and filled with minced and spiced meat and Mopane, a caterpillar-like worm which may be boiled, roasted or deep fried. Rooibos tea is a popular hot beverage whilst home-brewed beer, and especially ginger beer, and extremely potent palm wine are the most commonly encountered alcoholic drinks.