Stunning India is awash with bright, bold colours that bring the country to life. To celebrate the launch of our beautiful India in Colour infographic, this series looks at each colour in depth, examining its cultural, and sometimes religious, significance in India. Today, our focus is on the colour blue, rumoured to be the favourite colour of the Prophet Mohammed in Islam, and featured at centre of the Indian national flag in the shape of the 'Dharma Chakra', or 'wheel of law'. We will also explore why Jodhpur, the famous 'Blue City' that you can discover on our train journeys through India, is painted azure blue. 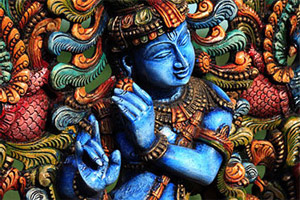 India is known for its spiritual consciousness and wealth of profound spiritual meaning; unlike secular western nations, India is still dominated by religious and spiritual practices, and faith often shapes the Indian interpretation of colours.

Blue is a colour interwoven with the spiritual psyche of India. Blue symbolises the infinity of the sky and the ocean; a bright shade of blue is seen as a colour of love. Blue in darker, more intense shades is synonymous with truth and intellectualism. Blue is also the colour of power and life, representing the life giving and sustaining properties of water.

In the Hindu faith, blue also has divine meaning. Many gods are depicted as having blue-tinted skin, in particular those associated with preservation and destruction, namely, Vishnu and Shiva. Vishnu, the 'Preserver of the World', has many guises and names, yet always retains his characteristically blue skin. Blue is thought to symbolise Vishnu's cosmic dimensions and his relationship with the earth.

The god Shiva, 'The Destroyer', is also often depicted with light blue skin and is called 'blue-throated'. His blue-tinted skin is believed to have come from swallowing poison from the ocean, in order to protect humanity from a battle between the gods and demons.

Blue also has significance for other religions in India. For Buddhists, blue is symbolic of the coolness of the heavens. The 'Blue Buddha' is a deep blue colour, and also known as the Buddha of medicine and healing. Turquoise, the blue semi-precious stone plays an important part in Buddhist rituals. In Islam, blue is second only to green in religious symbolism, and is often used to paint mosques as a symbol of protection. 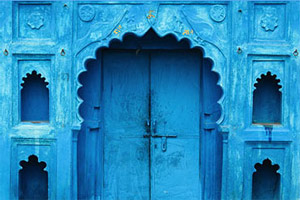 Approaching the vast Thar Desert aboard the Palace on Wheels, the city of Jodhpur shines like a mirage among the arid desert landscape. The fashion for blue-washed houses was a result of the Indian caste system, a strict social hierarchy adhered to by Hindus. Members of the prestigious Brahmin caste would paint their homes blue to distinguish themselves as elite members of Jodhpur's society, though the idea soon became popular enough to spread across the city. Whilst the restrictions of the caste system have somewhat eroded, the trend for blue buildings has persisted, and Jodhpur now boasts the nickname 'The Blue City.'

To immerse yourself in the azure beauty of India's colourful traditions, explore our train tours through India with Great Rail Journeys.

Learn more about the colours that unite the diverse Indian landscape from our stunning India in Colour infographic.

Baltimore & the Ohio Railroad: Heritage Railways of the World

Discover the history of a mighty American icon, the Baltimore and Ohio Railroad – pioneer of the American West and integral tool for the victorious Union during the American Civil War.