Cadaques is a small fishing village that lies in its own crystal-clear bay. The picturesque village consists of delightful white-washed houses along the beachfront and on the hillsides above. The village is famous for being the inspiration for much of Salvador Dalí's work. The famous painter visited Cadaques many times during his childhood and later kept a house and studio just outside the village. His house became a popular bohemian retreat for many of the 20th century's most famous artists, who lived here alongside the local fishing community.

Dalí and Picasso were known to have been particularly inspired by the incredible light and colour on display in Cadaques. Dali was quoted with declaring, "I have spent a delightful summer, as always, in the perfect and dreamy town of Cadaques. There, alongside the Latin sea, I have been quenched by light and colour". 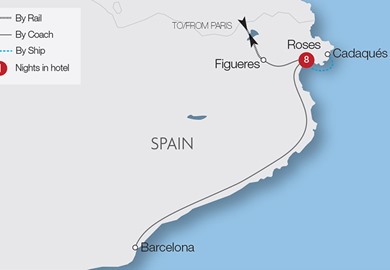 Map and accommodation
Our customers love our Cadaques tours
Powered by

Roses, Cadaques & The Catalan Coast
Anonymous
“It was an excellent holiday
Lastest articles from our journey blog