With its immense natural beauty, Bled, together with its surroundings, ranks among the most beautiful alpine resorts. The city is renowned for its mild, healing climate and thermal lake water. Lake Bled was formed after the recession of the Bohinj glacier. Following the last ice age, the glacier deepened the natural tectonic hollow, the result being a lake that is up to 6,955 feet (2,120 metres) long and 4,528 feet (1,380 metres) wide, and has a depth of over nearly 100 feet (30 metres). 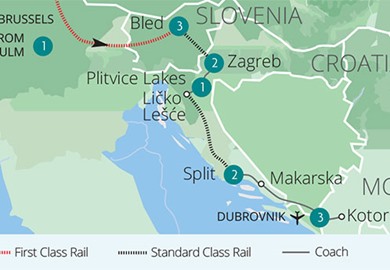 The thermal springs that lead into the swimming pool at the Grand Hotel Toplice enable pleasant swimming and successful treatment of stress-related illnesses, exhaustion, neuro-vegetative disorders and age-related fatigue. Analyses of the thermal water at the Grand Hotel Toplice show the temperature of the spring to be constant at 23°C. The breakdown of the analyses show that 10 litres of water contain 1520cm3 of free carbonic acid and 5.36g of naturally occurring salts.

The only natural island in Slovenia is situated on Lake Bled. The island has several buildings, the main one being the Pilgrimage Church of the Assumption of Mary (Slovenian: Cerkev Marijinega Vnebovzetja), built in the 15th century. The church has a 171-foot (52-metre) tower and there is a stairway with 99 steps leading up to the building. The lake is also well known among rowers since it has good conditions for the sport. It hosted the World Rowing Championships in 1966, 1979, 1989 and most recently in August and September 2011.

Take a winding trail from Velika Zaka to Mala Osojnica (2,247 feet or 685 metres). This peak offers the finest view of Lake Bled and its outlying areas, with the Karavanke, the Kamnik Alps and the Gorenjsko plain in the distance. This is one of the favourite viewpoints for photographers. All the well-known panoramas of Bled have been shot from there. Another 20 minutes of walking separates us from the top of Velika Osojnica (2,480 feet or 756 metres), affording an even more sweeping view than Mala Osojnica.

The cave under "Babji zob"

Babji zob or 'Hag's tooth' is an outlooking point above the village Kupljenik near Bled. This approximately 984-feet (300-metre) long cave is adorned with beautiful stalactite formations. A special feature of this cave is spiral stalactites, so-called helectites, and large calcite crystals, which are rare in Slovenia. The tradition of visiting this cave dates back to the 19th century and has continued to the present day through the Bled Society for Cave Research. The Society has arranged paths and electrical lighting to enable safe access to the cave.

In the abyss caves of Iglica, just above Bohinjska Bela, hides a 59-feet (18-metre) high waterfall on the Suha stream. It falls over a vertical wall of Permian limestone. In the village there is a signpost to the waterfall. The access is very easy.

The mile (1.6 kilometre) long Vintgar Gorge carves its way through the vertical rocks of the Hom and Bort hills and is graced by the Radovna, with its waterfalls and pools. Set in the immediate vicinity of Gorje, the ravine is approximately 2.5 miles (4 kilometres) north-west of Bled.

The Julian Alps (Slovene: Julijske Alpe, Italian: Alpi Giulie) are a mountain range of the Southern Limestone Alps that stretches from north-eastern Italy to Slovenia, where they rise to 9,396 feet (2,864 metres) at the Triglav mountain. They are named after Julius Caesar, who founded the municipium of Cividale del Friuli at the foot of the mountains. A large part of the Julian Alps is included in the Triglav National Park.

The only national park in Slovenia, lies in the immediate vicinity of Lake Bled. The territory of the National Park is very picturesque and varied. The highest mountain in Slovenia, Triglav, after which the park was named, lies in its centre. From Triglav, deep and sharply cut valleys, mainly of glacial origin, open on all sides in the form of a fan. The valleys and plateaux are covered by a carpet of green forests and meadows. Bold, high pointed mountain peaks rise above them, with dark and deep abysses. Clear mountain streams and small rivers run in the numerous gorges and beautiful ravines and troughs (Vintgar, Mlinarica, Mostnica) and flow into two larger rivers, the Sava and the Soca.