The ancient city of Pompeii is regarded as the best-preserved Roman city in the world, due to having spent the best part of two millennia buried by volcanic ash. Pompeii was one of many prosperous cities located in the fertile agricultural land surrounding Mount Vesuvius, until AD79 when an enormous eruption took place, killing all the inhabitants almost immediately. It is now thought that hot surges (of at least 250 C) were responsible for killing the people of Pompeii, rather than the volcanic ash that buried them.

Archaeological wonder
Pompeii was so well preserved after the eruption, having been buried by up to six metres of volcanic ash, that it provides a real insight into Roman life in the first century AD. Pompeii lay buried and undiscovered for almost 1700 years, eventually being found by accident in 1749. After extensive excavation, Pompeii is now a UNESCO World Heritage site which provides a glimpse of how things were at the height of the Roman Empire.

Top to Toe of Italy 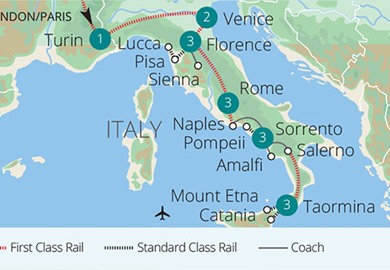 “Outstanding tour manager; great local guides; two brilliant agriturismo visits (one near Siena, the other in Sorrento). Huge potential for things to go wrong during such a long, involved trip - nothing did go wrong for me.
Collected by Great Rail Journeys
Lastest articles from our journey blog