The principality of Monaco sits on the stunning Côte d'Azur, surrounded on three sides by France and approximately 10 miles from Italy. The principality operates as a constitutional monarchy, with Prince Albert II as the current head of state. Famous as a tax haven, Monaco enjoys some particularly impressive statistics: it is the most densely populated country in the world, has the highest life expectancy (at almost 90 years) and the lowest unemployment (0%).

Monaco is officially the second smallest country in the world, losing out only to Vatican City. Possibly the city's most famous attraction is the annual Formula 1 Grand Prix, where Monaco's wealthiest residents and visitors watch the high-powered cars screaming through the city streets from the comfort of their super yachts moored in the harbour.

Nice and the Côte d'Azur 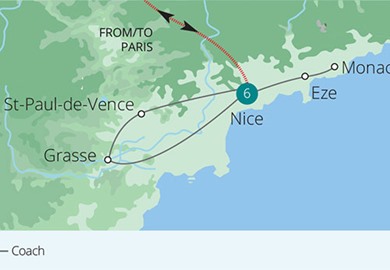 One of a number of year-round attractions, including the Palais du Prince, is Prince Albert's Royal Palace. The Palace was originally built in 1191 as a Genoese fortress and has been home to the ruling Grimaldi family since they first captured it in 1297. Each different ruling member of the family has influenced its design (both internal and external), and not always in a positive way; the Palais du Prince is far from Europe's most elegant palace. Outside of the Palace, the daily Changing of the Guards ceremony is a popular event for visitors. It takes place just before noon, but lasts only two minutes, so don't be late!

The impressive Oceanographic Museum and Aquarium is Monaco's most visited museum, although competition for this title could hardly be considered stiff. The museum, built at the behest of Prince Albert I, allows you to explore the underwater world of the renowned oceanographer Jacques Cousteau.

In the mid-19th century, the debt-riddled Grimaldi family struck upon an idea to open a casino as a method of raising funds. The casino occupied several different sites within the principality until a permanent site was chosen at Les Spelugues ('the Caves'). The impressive casino, as seen today, began construction in 1858 and was completed in 1863. The area was promptly renamed 'Monte Carlo', in honour of Prince Charles, to make it sound more appealing to visitors… with considerable success: the casino provided the principality with its main source of income for 150 years.