Phillip Island, named after Governor Arthur Phillip, forms a natural breakwater for the shallow waters of Western Port Bay. It has 60.3 miles (97km) of coastline, and a 2,091 foot (640m) concrete bridge connects the mainland town San Remo with the island town Newhaven.

In the 2001 Census the island's permanent population was 7,071. During the summer, the population swells to 40,000. With such a small population, it may be surprising that the penguins of Phillip Island attract approximately 3.5 million visitors each year. At sunset, overlooking the beach from the viewing platforms, you will encounter a wonderful spectacle of the wild fairy penguins emerging from the sea and crossing the sand to their burrows in the dunes. 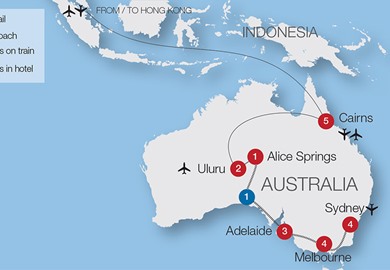 Australia & the Ghan
Mr N Larvin
“A well organised experience. You leave everything to the tour manager. Just turn up when they say. Australia is a lovely country to visit.
Lastest articles from our journey blog