The frequent NSW TrainLink XPT service operates in and between several Australian cities, including Brisbane, Sydney, Melbourne and Casino.

Similar in design to the UK's InterCity 125, the XPT follows the route of the Hume Highway through the state of Victoria, passing through Benalla and the cathedral city of Wangaratta before entering the state of New South Wales and the Riverina region. The broad, flat plains of the Riverina comprise some of the most agriculturally productive land in Australia due to the favourable climate and a plentiful water supply.

The XPT service continues through the cities of Albury and Wagga Wagga and then heads west to Cootamundra and the Southern Tablelands. Leaving Goulburn, the train enters the Southern Highlands of New South Wales, a mountainous wine-producing region that sits on the Great Dividing Range. Finally, after passing through the suburbs of Campbelltown and Strathfield in the Australian capital, the service pulls into Sydney's Central Railroad Station.

We reserve First Class carriages for daytime journeys on the  NSW TrainLink XPT. First Class accommodation features extra legroom, a deluxe reclining seat, and a footrest. Most seats rotate to form a 'conversation group' of four. A buffet car selling a selection of hot and cold meals, snacks, alcoholic and non-alcoholic drinks are available on board the train. 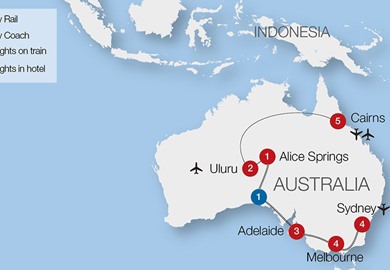