The narrow gauge Isle of Man Steam Railroad runs over a 15.3 mile (24.6km) route which links Douglas, the island's capital, with Port Erin. The line was originally opened for service in the 1870s and is just a small section of what was once a much larger network of railroad lines which connected many towns and villages on the Isle of Man. Passengers on the Isle of Man Steam Railroad are taken on a scenic journey through verdant countryside and along the spectacular southern coastline in vintage carriages hauled by original steam locomotives bought for the railroad in the late 19th and early 20th centuries. 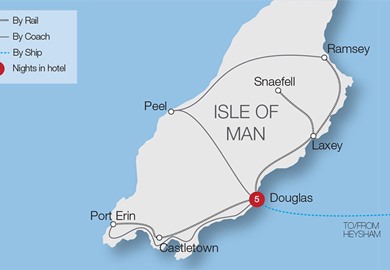 Vintage Railroads of the Isle of Man
Mrs M James
“Enjoyed the whole vacation especially the steam train and the trip to the top of the hill although the electric railroad was a bit noisy and uncomfortable .The hotel was good with very good food. The coach driver was one of the best ever, a mine of information and an expert in motor bike racing. I wish I could have seen a Manx cat but I didn’t have enough time.